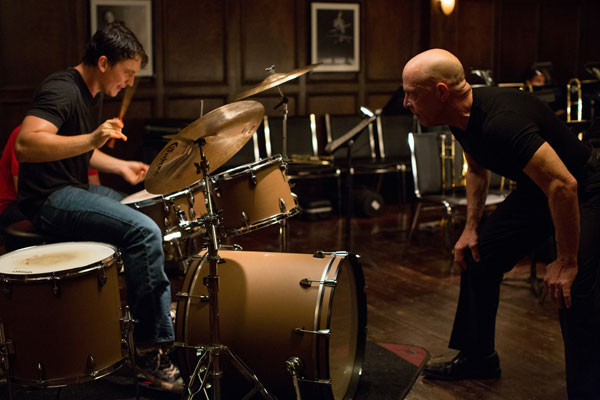 If recent release Birdman borrowed a cup of energy from its drum score, then Whiplash, about a young jazz drummer at a cutthroat-competitive conservatory, steals a whole quart. I’m not sure the movie would work if it was about a soprano sax player tootling mellow; the story’s too thin, and it requires all that pounding of the skins to give it muscle.

Socially maladroit and painfully single-minded, freshman Andrew (Teller) lives only to drum – not out of pleasure, necessarily, but in order to be anointed the next Buddy Rich. Early on, he’s tapped by an instructor named Fletcher (Simmons) to join his elite competition band. Fletcher is a legendary monster, but he knows how to seduce this dewy-eyed hopeful. He makes nice with Andrew – asks about his family, props him up with talk of nascent genius and tales of Bird’s first hops – only to use that information to sweep the leg, so to speak, to publicly humiliate his plebe drummer, ostensibly to goad him to be better.

Andrew does get better – he gets great, actually – and he wears his bloodied paws like a badge of honor, even as he shudders when his alpha barks. The band at large is only glanced at, but writer/director Damien Chazelle (Guy and Madeline on a Park Bench) cannily conveys the cycle of abuse. Fletcher’s ensemble, cowed, hardly makes eye contact with their conductor. Still, they’re quick to mimic his top-down brutality: The alpha rears a new pack to bare sharp teeth.

Ultimately, Chazelle isn’t interested in the long lens. He’s tightly fixated on master and supplicant, each with his own agenda, and the film is essentially one long cockfight. After his debut as a shattered penitent in Rabbit Hole, Teller has made a career out of being the snarkiest guy in the room. It’s startling, and maybe a setback, to see him playing such a dope here. Andrew is a youngling – the clay hasn’t met the kiln – and for all his sweat-splayed aerobics, he’s not all that interesting to watch; how do you make inroads on a kid who’s running in place? The starkly bald and fracture-lined Simmons has a face you might chisel into rock, and he’s endlessly fascinating in motion, too. But again, does Chazelle really have anything unique to say about this raging megalomaniac? The leads’ prolonged, puffed-feathers sparring is entertaining while it lasts, but the sensation of something sizable is only fleeting. 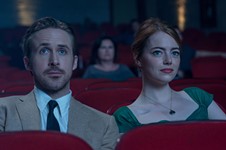