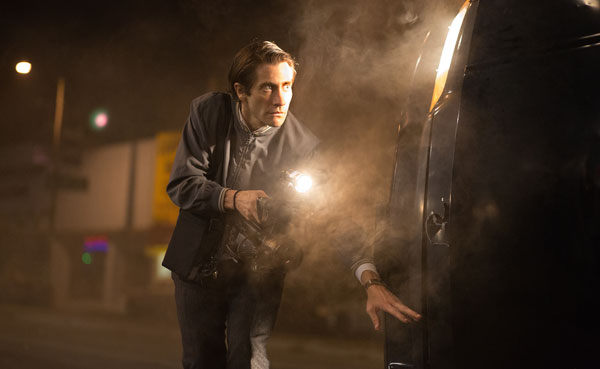 “I’m a little lost,” Lou Bloom (Jake Gyllenhaal) admits to the security guard who’s spotted him stealing chain-link fence. A petty thief unable to land a real job, Lou’s gaunt appearance makes his perpetual grin appear all the less trustworthy, his overly rehearsed rhetoric only ringing more hollow with each passing encounter. However, in due time, Lou is drawn like a moth to the very real flame of a car wreck on the L.A. interstate, not helping the paramedics or police, but rather observing the parasitic cameramen out to get juicy footage for local news stations to air.

From that moment on, Lou is gifted with glorious purpose, set on finding himself a camera and a police scanner, then a news producer Nina (Russo) interested in buying his better clips, then an intern Rick (Ahmed, delivering a wonderfully wary supporting turn) who’s eager to work the GPS and watch the car once at the crime scene. Lou doesn’t seem to sleep, getting the goods at night and staying up to capture their subsequent broadcast. Furthermore, Lou doesn’t seem to care about anything or anyone else, not if it means getting the best of angles on the worst of situations.

Dan Gilroy is a veteran scribe now making a splash similar to the one his brother Tony had with his directorial debut Michael Clayton. Nightcrawler may not have much more to say about the bloodthirsty media realm than what was skewered in Network in 1976 (such persistent relevance is damning in its own right), but that satire is secondary to Lou’s tenacious, self-delusional rise through the ranks. We’re given no tragic backstory for our antihero, and Gyllenhaal’s terrifically fierce performance leaves us with no need to wonder. The evident byproduct of self-actualization seminars and good old-fashioned amorality, Lou epitomizes all-American ambition left to curdle in the media spotlight, the extent to which he is willing to endanger others coming to a head in a nerve-wracking finale.

Lou’s wrong-headed convictions lead to a pair of show-stopping monologues amid countless uncomfortable exchanges between him and his direct competition Joe (Paxton), intern Rick, and producer Nina, who tests the boundaries of news ethics as much as Lou does without leaving the comfort of her control room. Much as Robert Elswit’s sharp cinematography captures the concurrent danger and appeal of after-hours Los Angeles, James Newton Howard’s score wavers brilliantly between serving as ominous accompaniment to Lou’s nocturnal scavenging and providing a counterposing sense of uplift worthy of his deranged aspirations.

Yet Gilroy and Gyllenhaal prey expertly on the same inability to look away that Lou and Nina specialize in exploiting, conveying uncomfortable lengths and plumbing unspeakable depths with a shared determination. Releasing Nightcrawler on Halloween may seem counterintuitive, but then again, when better to release a thoroughly gripping portrait of an utterly modern sociopath? 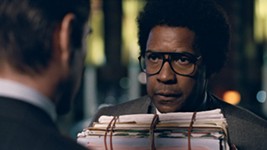