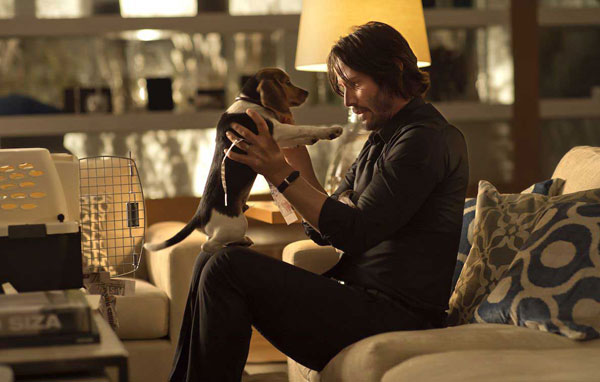 Anyone who misses the initial flash-forward in John Wick’s opening moments would be forgiven for assuming that this latest Keanu Reeves vehicle is in the tradition of earlier weepies like The Lake House and Sweet November, as widower Wick comes to terms with the passing of his late wife (Moynahan) and the arrival of her last gift, an adorable widdle puppy. It’s an admirably spare sequence, establishing Wick’s grief and gradually renewed happiness in simple, effective interactions.

Sadly for them, such a promising new friendship isn’t long for this world, as John and his furry friend are assaulted by Iosef (Allen) and his merry band of thugs once they set their sights on Wick's ’69 Mustang. Luckily for us, what Iosef doesn’t realize is that Wick was a former employee of his father, NYC kingpin Viggo (Nyqvist), and remains a hitman of remarkable prowess when it comes to turning his well-justified quest for vengeance against the underworld he had once left.

An entire reel is devoted to establishing Wick’s legendary reputation – “You call him the bogeyman?” “No. He’s who you send to kill the fucking bogeyman.” – before the film sets about fulfilling it in grand displays of violence. A fight coordinator on the Matrix trilogy, first-time director Chad Stahelski respects the choreography of his profession with sustained action sequences worthy of Wick’s killer reflexes, ensuring that each execution in this ballet of bullets and bloodshed retains a brutal weight when contrasted against the tedious parade of gruesomeness in The Equalizer, for instance.

What’s even more surprising than Stahelski’s verve for set-pieces is writer Derek Kolstad’s ease with world-building, weaving in a colorful cast of fellow assassins (including the likes of Ian McShane, Willem Dafoe, and Adrianne Palicki) and their own relationships, hangouts, and currency with a confidence that makes the film feel as much about the gathering of mutually respected professionals as about the story itself. Allen makes for an ideally squirmy target, while Nyqvist plays into the movie’s droll sense of humor as a villain instantly resigned to that fate which surely awaits him.

And at the center of it all stands Reeves, a convincing embodiment of both the calm before the storm and its subsequent capacity for ruin. Impossibly 50 years old, the man known to most for the utterance of a single exclamation asserts his place as an action star two decades after Point Break and Speed convinced audiences that he might just have the chops. “People keep asking if I’m back,” John barks at his captors. “Yeah, I’m thinking I’m back.” Yeah, we’re thinking so, too. 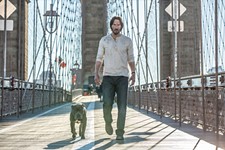