Writer/director Justin Simien shatters all illusions of a post-racial America with this idea-packed comedy that pokes face value in the eye. This crowd-sourced indie film skips handily from barb to barb, sometimes sacrificing narrative flow in the process, but the wonder of it is that it functions as delightfully and open-endedly as it does. Despite its title, Dear White People addresses all races, and all cultural majorities and minorities. In matters of theory and practice, Simien is the enemy of comfortable rationalization.

Ostensibly, the film follows four black college students who are trying to hone their identities while students at the mythical Ivy League college Winchester University. The film’s title echoes the name of the radio show hosted by Samantha White (Thompson), a firebrand who looks and dresses like Denise Huxtable. Sam’s witty aphorisms (i.e., “Dear white people, please stop touching my hair” or “Dear white people, the number of black friends a white person must have in order to not seem racist has been raised to two – and your weed dealer Tyrone doesn’t count”). That her last name is White underscores a sense that Sam is also addressing herself.

Railing against the university’s Randomization of Housing Act which had the effect of breaking the color barrier at the all-black campus house Armstrong/Parker, she runs for president of the hall against the incumbent president Troy Fairbanks (Bell), who is also her former beau and is now dating a white girl. He’s a conservative young man whose father is dean of students (Haysbert). Coco Conners (Parris), who aspires to be famous, will do anything to not look “hood” and creates a podcast that puts “Dear White People” in its crosshairs. Lionel Higgins (Williams, the star of Everybody Hates Chris), a gay nerd with a giant ’fro that most of the black students mock, fits in nowhere, but it’s through this budding journalist’s eyes that most of the action is viewed.

The plot comes to a head when the most prestigious and predominantly white campus house decides on the theme for its Halloween party: “Liberate Your Inner Negro,” reflecting real-life campus uproars over similar parties in recent years. Meanwhile, Sam and the Black Students Union have managed to resegregate their dining hall and threaten any white student who dares to attempt entry. The film is structured in chapters with title cards between segments, allowing it to jump hither and yon. It’s a strategy that privileges quips over narrative flow and strands a few storylines while providing no character closure. Still, the cast is game and Siemen’s trenchant observations are the mark of a filmmaker with something to say – an increasing rarity in this day and age. 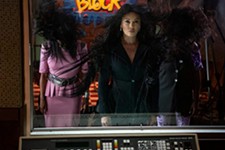