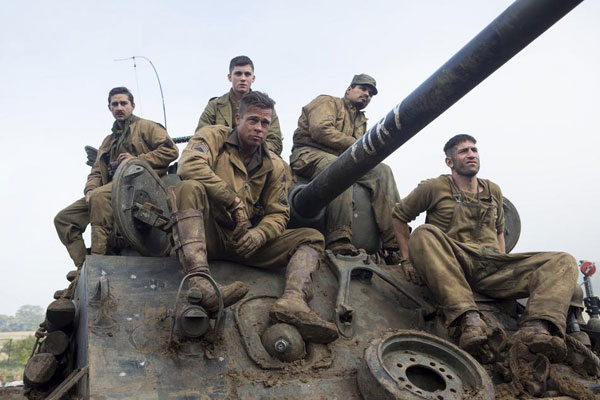 Fury opens with the eerie image of a white horse emerging through a pall of smoke into a muddied battlefield. Astride it is a Nazi officer, calmly surveying the corpses, flame-kissed tanks, and overall hellishness of an epic, and recent, battle. Ayer’s lyrical realization of the most fearsome of the Biblical Four Horsemen is a shrewd and telling introduction to a film about an American Sherman tank crew trundling its way to Berlin during the waning and most deadly days of World War II. It’s also, intentionally I think, a nod to Samuel Fuller’s war-movie milestone The Big Red One, which similarly placed an anachronistic equine amidst the red-misted fog of war. Fuller’s film is inarguably a stone-cold classic of the genre, but Fury, for all its cacophonous chaos and half-crazed characters, never quite reaches the shellshocked heights required to make it a bona fide pillar of cinematic combat.

As tank commander Sgt. Don Collier, Pitt is both his crew’s literal and figurative “Wardaddy” and the moral compass of the film. “This is war, there is no right or wrong,” he hollers at milquetoast replacement gunner Norman (former Percy Jackson Lerman), an army typist suddenly thrust into the maw of hell. Outmatched by the Germans’ Tiger and Leopard tanks, Collier’s fatherly bond with his men is palpable, whether he’s reining in the kill-happy Grady (a great, borderline psychopathic performance from Bernthal) or playing Last Dad Standing against a seemingly endless horde of Nazis. Yet Pitt’s work here isn’t a stitch on his Inglourious Basterds Lt. Aldo Raine. It may be more realistic (or archetypal) but it’s nowhere near as memorable. The same can be said for the rest of the cast and most of the set-pieces, which, while often pulse-poundingly well-shot (by Roman Vasyanov), too often fail to connect emotionally. Fury’s worth seeing on a big screen – if only to wallow in the sprawling sound design and muddy, bloody, tank-on-tank melees – but it’s too strangely hidebound by overused dramatic tropes to inflict serious damage.