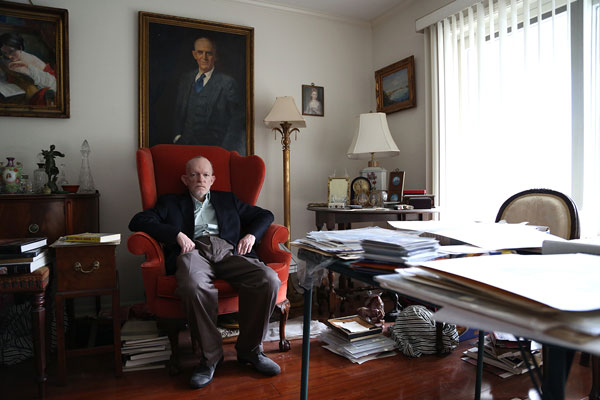 The paintings of Mark Landis have been featured in at least 46 museums in 20 different states over the course of 30 years. So why isn’t this shy, slender Mississippian a renowned artist in his own right? Chalk it up to his knack for crafting expert forgeries of everyone ranging from Valtat to Picasso, Seuss to Schulz, as chronicled in the fascinating documentary Art and Craft.

Landis views this lifelong con as an ideal alignment between his God-given gifts for impeccable duplication and his own philanthropic generosity. After all, he has committed no legal crime by donating his works to museums rather than selling them, a maneuver which doesn’t leave art world professionals like Matthew Leininger, former chief registrar at the Oklahoma City Museum of Art, and Aaron Cowan, art gallery director for the University of Cincinnati, any happier for having been duped.

Co-directors Sam Cullman, Jennifer Grausman, and Mark Becker never make value judgments about Landis, allowing us to draw our own conclusions about this possibly troubled, undeniably talented man, a pathological liar who passes himself off as a priest or invents dead sisters to deter questioning, yet refuses to prevent journalists, authorities, and documentarians alike from showcasing his fraudulent pursuits, embracing the exposure instead.

“Necessity is the mother of invention, but sometimes it is the stepmother of deception,” Landis wryly reminds by way of a Charlie Chan line. At its best, the film explores mutual cycles of exploitation: the method by which Landis preys upon the art world’s blinding hunger for great works, the way that Leininger and Cowan hope to turn the tables on him by way of a formal exhibition, the extent to which a trio of filmmakers might relish the eccentricities of a documented schizophrenic. Much like the experts drawn to Landis’ paintings, Art and Craft effectively invites viewers to question the honesty of what’s been placed inside the frame.