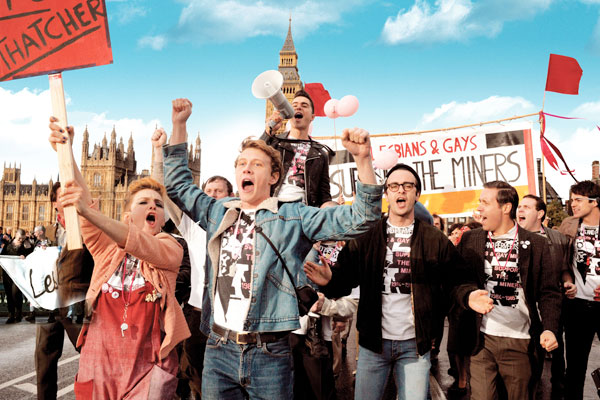 Based on an inspirational true story (is there ever any other kind?), Pride follows in the footsteps of The Full Monty, Kinky Boots, and other like-minded “Britcoms” perhaps to a fault, as it recounts the Thatcher-era alliance between gay rights activists and striking miners with a light touch and a familiar narrative arc.

In 1984, homosexual teen Joe (MacKay) quietly joins the ranks of an LGBT group led by Mark (Schnetzner), a group which in turn attempts to raise money among their own London community in order to support the families of miners on strike in rural Wales, with the hope that each group can help one another with their respective political crusades. While the blue-collar locals are reluctant to publicly align themselves with perceived sexual deviants, town leaders Cliff (Nighy) and Hefina (Staunton) embrace their much-needed generosity all the same, gradually advancing a mutually progressive agenda in the process.

The second feature from stage veteran Matthew Warchus (Simpatico), Pride hits its crowd-pleasing marks dutifully, alternating heart-to-heart confessions with party-hearty dance scenes as the characters gradually increase the spans of their personal comfort zones. There’s nothing wrong with a formula done well, and director Warchus and writer Stephen Beresford deliver their characters’ setbacks, secrets, and successes with care. Then again, it helps to have an ensemble like this in your corner. MacKay is a bit of a blank as the intended audience surrogate, but that’s easy to overlook when reliable character actors like Nighy, Staunton, Dominic West, and Paddy Considine are having – if you’ll pardon the expression – a gay old time.

However, this cast and this story may have been better served by a less simplistic treatment. The roles are generally two-dimensional at best: the closet case, the insecure leader, the old queen, the token lesbian. These actors provide more than enough personality to compensate, but reducing real-life crusaders to a handful of tidy archetypes runs the risk of marginalizing their off-screen accomplishments in the name of artificial uplift.

With that being said, Warchus and company happen to do artificial uplift rather well, and today’s headlines suggest that such battles of compassion are still being waged three decades hence. If Pride manages to be somewhat reductive in its depiction of equal rights activism, at least it’s reductive in the right direction. 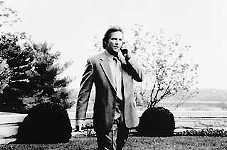 Simpatico
Here's further proof that playwrights think very differently from most people. (Their brains, if diagrammed medical-textbook style, would be divided into large, primary-hued areas labeled ...