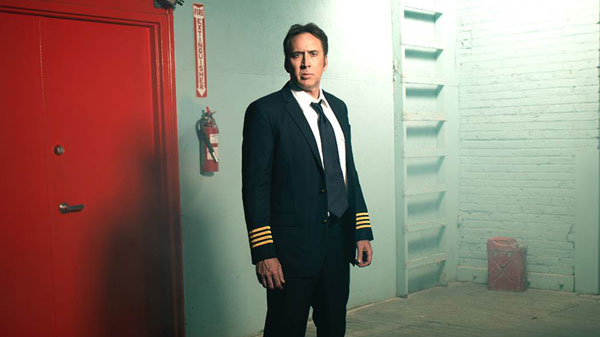 Whether they know it or not, most movie lovers are probably big fans of Vic Armstrong’s work. As Harrison Ford’s stunt double during the original Indiana Jones trilogy and a second-unit director on action films ranging from Total Recall to Thor, the man is an unsung Hollywood legend responsible for many an edge-of-your-seat moment.

Sadly, those moments are few and far between in Left Behind, Armstrong’s first proper directorial effort since 1993’s Army of One and a chintzy re-adaptation of 2000’s Kirk Cameron snoozer based on the same series of hugely popular Christian novels. In fact, despite a larger budget and the presence of at least one honest-to-goodness movie star, Nicolas Cage, this may be one of the most inept films to ever see a wide theatrical release courtesy of pay-for-play distributor Freestyle Releasing (God’s Not Dead, The Identical).

Cage stars as Rayford Steele, a philandering airline pilot who has grown estranged from both his born-again wife (Thompson, putting in maybe a day’s work) and his resentful daughter, Chloe (Thomson, no relation). Despite Chloe coming home for his birthday, Dad’s got a trans-Atlantic flight to catch, and thus, they’re left to find one another when the sudden onset of the Rapture – causing all good Christians to vanish from this world before the End Times commence – leaves him stranded in the air and her panicked on the ground.

For a disappointingly subdued Cage, it means finding himself alone at the controls of a hackneyed doomed-airliner TV movie with a Benetton-worthy assortment of characters: the worried single mom, the relapsed junkie, the not-a-terrorist Muslim, the corporate fat cat, the angry dwarf, and a hunky journalist (Murray) whose chance meeting with Chloe at the terminal already has him determined to return to his sudden true love. For teary-eyed Thomson, it means enduring lousy digital effects, terrible child performances, bad jump scares, largely unconvincing extras, and a hilariously overwrought musical score that can never quite decide which kind of movie it actually belongs to.

Religious dramas have a track record of prioritizing wholesome values at the cost of production values, and while Left Behind is mostly too preoccupied with being a hoary thriller to preach to the converted, it’s a thoroughly laughable attempt to marry bombast with sermonizing. New Orleans is a less-than-convincing substitute for New York, Cage and Thompson’s stiff performances only look more professional in contrast to the amateur hour surrounding them, and the promise of a continued adventure feels akin to a threat after two long hours of melodrama. If a sequel to this reboot actually gets made, then God help us. 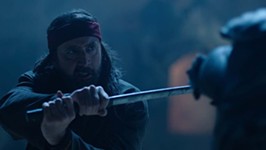