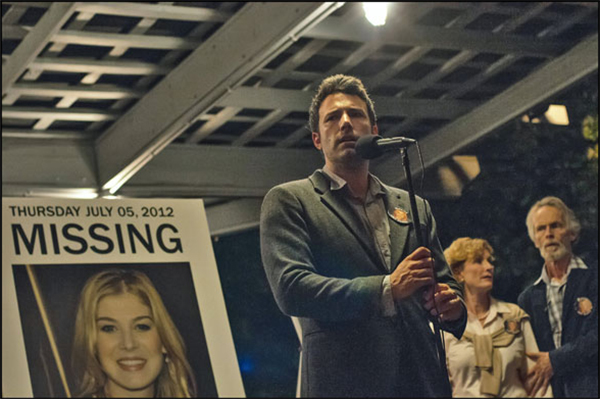 ”There is no trap so deadly as the trap you set for yourself,” wrote Raymond Chandler in 1953’s The Long Goodbye, and so it goes, through a glass darkly and deadly, in David Fincher’s nightmarishly fine Gone Girl. I say nightmarishly because nearly the whole of this screen adaptation of Gillian Flynn’s bestselling corkscrew of a novel unspools like an awful case of lucid dreaming gone haywire.

Nothing is what it seems in this he said/she said thriller, which hungrily reinforces the adage that no matter how well you think you know your spouse, you’ll never be able to really and truly know the person. Nick Dunne (Affleck, in one of his best performances to date) and his wife Amy (Pike) seem to have the perfect meet-cute and the best marriage. On the whole, they appear to be living the dream in New York City’s upper-class, pseudo-bohemian substrata. Until, that is, Nick’s mother falls ill, the stock market implodes, and the pair is forced to downscale to Nowheresville, Missouri, where the couple purchases a bar (meta-dubbing it “The Bar”) to help make ends meet. Then Nick returns home on their fifth anniversary to find Amy missing and the living-room table in pieces on the floor. Enter detective Boney (Dickens, wryly humorous) and her sidekick cop Jim Gilpin (Fugit), who quickly establish that there’s been a whole lot of crimson spilled in the kitchen and hastily wiped up, and suddenly Nick is at the center of a 24/7 media firestorm, with him as Suspect No. 1, and no one but his sister Margo (Coon) going by the woefully out-of-date “innocent until proven guilty” maxim.

As in the book, the film narrative is split between Amy’s voiceovers as she writes in or reads from her diary, and Nick’s parallel story of his crumbling life, as clue after clue insinuates that he’s a cold-hearted wife-killer. Affleck pulls off a tremendously difficult balancing act, alternately being sympathetic or a total jerk, while Pike is the type of blonde only Alfred Hitchcock could love. Fincher and cinematographer Jeff Cronenweth move from bleakly mesmerizing scene to mesmerizingly bleak scene with a sure hand, while Trent Reznor and Atticus Ross complement the film’s jagged, uncertain tone with a suitably downbeat electronic score.

Gone Girl is pitch-black neo-noir, and part of me would just love to be able to see what the dark shades of Edgar G. Ulmer, Fritz Lang, or even, obviously, Hitchcock might have done with this kind of ultra-combustible married-without-children matériel. Fantasies and phantasms aside, Fincher proves himself yet again to be a better cinematic psychologist of (in)human nature than almost any other director alive. It’s another squirmily excellent date movie from hell, courtesy of contemporary cinema’s most overt nihilist.