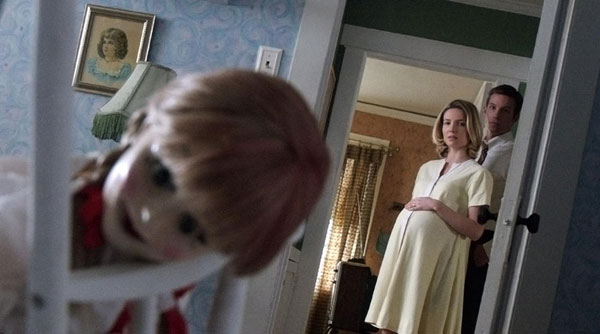 While it’s possible that Annabelle might give a few audience members goose bumps, anyone who’s ever seen Rosemary’s Baby – or pretty much any film James Wan’s had a hand in since helming 2007’s Dead Silence, the Saw franchise excepted – will figure out what’s going on within the first 30 minutes.

Wan served as producer here, but director Leonetti is fresh from doing the director of photography chores on Wan’s 2013 Amityville Horror meets The Exorcist knockoff The Conjuring. Effectively a prequel to that above-average freakout, Annabelle provides an origin story for the titular tiny terror with the awfully agog eyes.

Set against the backdrop of Charles Manson’s summer of blood, Leonetti, working from a script by Gary Dauberman, starts strongly with a pair of winning turns by Horton and Wallis as doctor-and-wife John and Mia Gordon, a believably bland Californian couple with a bun in the proverbial oven. After a minor tiff, John surprises his doll-collecting spouse with the as-yet-uncursed (and unnamed, but still pretty ghastly) doll. Subsequently, the pair endures a home invasion by creepy-crawling “cult” members, and Mia urges John to toss the bloodied Annabelle out with the trash, which he does. Predictably, though, she turns up in the bottom of a box after the pair moves to a Pasadena version of Rosemary and Guy Woodhouse’s famed Dakota. Equally foreseeable are the ominous events that begin plaguing Mia: sewing machines, rocking chairs, and hi-fis that go on and off by themselves, and a shadowy figure in the basement. The devil, you say!

Annabelle’s production and set design go a long way toward creating a vague sense of unease early on; everything is painted in the muted, muddied pastels of the era, as if in mourning for the day-glo grooviness of the recently concluded Summer of Love. No amount of studiously uncool decorative metal wall hangings and billowing chintz, however, can make anything original out of the low-rent proceedings. The Polanski rips begin with the obvious (having a couple named Mia and John, as in Farrow and Cassavetes, is about as blatant as you can get) and continue throughout, to an annoying degree. Add that to the fact that the formulaic script offers genre fans nothing whatsoever that hasn't been done before, and done better, and you might find yourself quoting Rosemary: “This is no dream, this is really happening.” And I don’t mean “happening” as in “far out, man.” 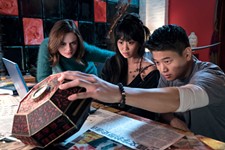 Wish Upon
A music box leads to deadly wish fulfillment