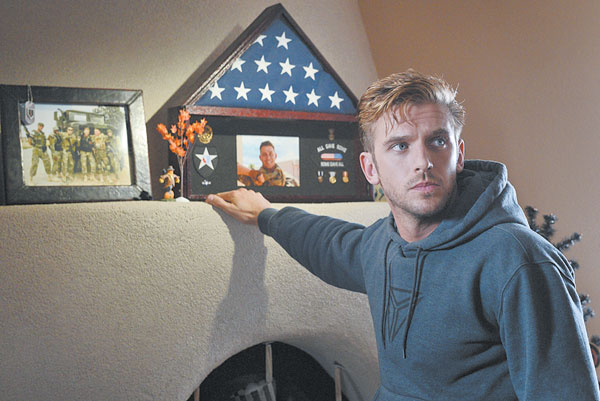 The badass, genre-scrambling team of Adam Wingard (directing) and Simon Barrett (writing) continues to wreak horrific and frequently hilarious havoc with their latest nonstop reel of severely awesome. Wingard has cast hunky Dan Stevens – the ex-Downton Abbey actor who is here seriously buffed up from his role as the skaggy junkie in A Walk Among the Tombstones – as David, a mysterious ex-soldier who insinuates himself into the lives of a grieving New Mexico family. They’re in mourning for their own soldier boy Caleb, one of the “Some gave all” in the KIA mantra: “All gave some, some gave all.” Thus, when mom Laura Peterson (Kelley) answers the door one bright and sunny October morning to find an apparent close friend of her late son standing there, she invites him in. “I was with him when he died,” David tells her, adding, “He made me promise to find his family and tell them that he loved them.” Seriously, who wouldn’t want to hear one final gift of compassionate reassurance from the loving dead? And just like that, David ingratiates himself into the Petersons’ lives. But isn’t it odd, those sudden storms that pass across his face every now and again, not to mention his helpful ultraviolence when the Petersons’ teen son Luke (Meyer) is bullied at school? What’s that all about? Suffice it to say, Downton Abbey this isn’t.

Wingard and Barrett have made some terrific nongenre-specific films in the past, among them A Horrible Way to Die and the terrifically lunatic You’re Next, and The Guest only adds to their reputation as masters of gallows-humor horror shows. With performances that are uniformly excellent across the board, a nervy and nerve-wracking sense of suspense, and the whole idea of Halloween in a desert town (none of John Carpenter’s trademarked “dry leaves blowing down the sidewalk” here), The Guest is a slow-burn nail-biter that recalls – in a good way — Eighties slasher films, small-town terrors, the early work of James Cameron and, yep, John Carpenter’s heyday as well. Even Steve Moore’s synth-heavy score and the diegetic soundtrack choices help establish the film’s Eighties-era debts.

A slightly jarring, third-act turn that injects a whole new tone, not to mention a whole new character, into the already riveting thriller, fails to derail the whole. With The Guest, Wingard and Barrett have once more upped the ante for the indie horror flick pack. 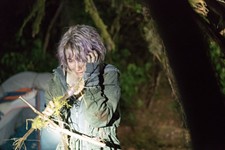