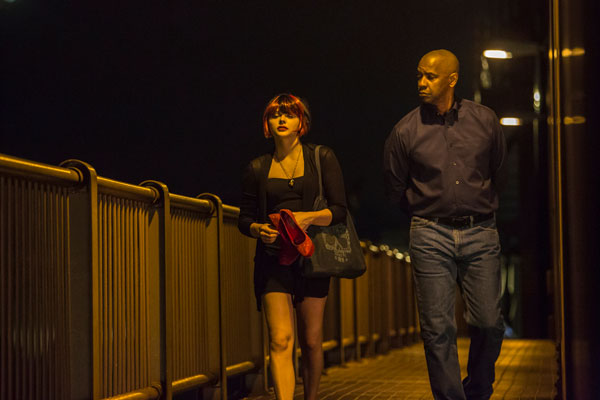 Fuqua directs and Washington stars in a nearly perfect revenge outing. Beautifully shot (by Mauro Fiore), if a little over-cinematic – there are any number of sequences of rain, night, and light, lovingly filmed, wandering and intense shots rich in color and atmosphere, but often for not much reason – as is this director's wont. The film offers a tightly built narrative that is faithfully generic, consistently smart, and exciting.

Based on the old TV show starring Edward Woodward, this take begins with Robert McCall (Washington) working at a big-box hardware store while leading a simple and routine life. Teri (Moretz), a hooker who eats at the diner where he hangs out nightly, gets in trouble with her pimps from the Russian mob. Without much hesitation, McCall makes the moral decision to come to her aid. Soon this requires violence, at which he is mysteriously an expert.

Then, of course, it turns out this Boston branch of the Russian mob, which runs all kinds of illegal operations, is controlled by one of the oligarchs back in the mother country. McCall's action against the local boys results in Teddy (Csokas) – a master Russian enforcer and vicious, cold-blooded killer – being sent over to track him down.

The film shows unusual skill in building its narrative. The trajectory of these avenging-angel movies, at their best, follows as the reluctant but skilled hero is put upon in all kinds of ways until he is forced to retaliate. McCall doesn't even have to be pushed very far before he turns mean in the pursuit of justice. Skillfully structured, the outrages against the hero and his friends are clearly illustrated here, but the brutality of the bad guys is so pervasive, they mangle everyone they encounter. When McCall responds, it is as the cool, professional, government-sanctioned killer it turns out he once was. The greater the odds against him, the smoother he moves.

Washington is always superb when playing characters with a surface calm, but a boiling-over interior. Here, as the protagonist, he steers a vivid course through a seamy world.

Undoubtedly some will criticize this movie as being overly violent while empty of meaning. Instead, I'd argue that Fuqua is evolving into one of the most interesting and ambitious mainstream action film directors currently working, and that some day his filmography (Training Day, King Arthur, Shooter) will earn serious reappraisal.