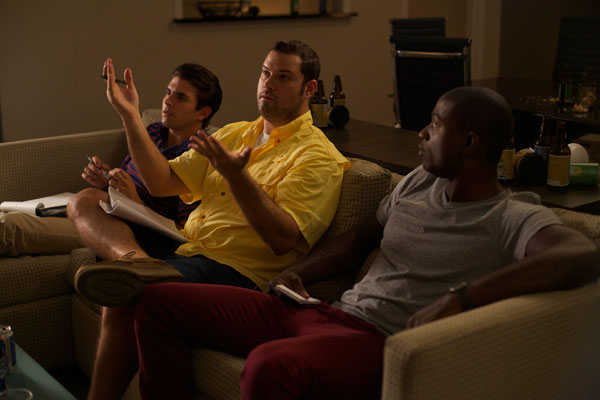 When Sam (Russell) discovers that he can’t graduate college until he pays back the nine grand in tuition he racked up after his scholarship ran out (perhaps something he should have been paying more attention to), he hatches a scheme to create a fake charity helping Africans connect with clean water – the Get Wells Soon Project (get it?!) – in order to get the cash. He convinces three of his frat bros to help him, and together they throw a one-off fundraiser that catches the eye of Ken (McDonald), who runs a national Christian charity organization. He is so impressed with their moxie, he offers to send them on tour around the country, and they, in turn, decide to skim off the top of these now-substantial contributions. The inevitable crisis of conscience is something you can set your watch by.

Believe Me is the third film by Bakke, whose first two films were naive documentaries wherein he and his brohams traveled, first around the States, and then Europe, asking people about their faith while seemingly questioning their own. This is his first narrative feature, and while it looks slick enough, it is a far cry from the subversive critique of contemporary Christian youth culture it so achingly wants to be. The characters are bland caricatures, the plot is boilerplate at best (have they even heard of Elmer Gantry?), and the tone vacillates wildly between attempted comedy and melodrama. But what is most egregious, and seems completely lost on the filmmakers, is that the film is the very thing it attempts to expose: a pandering cash-in on faith-based films disguising itself as an honest examination of belief. And that, true believers, is unforgivable.