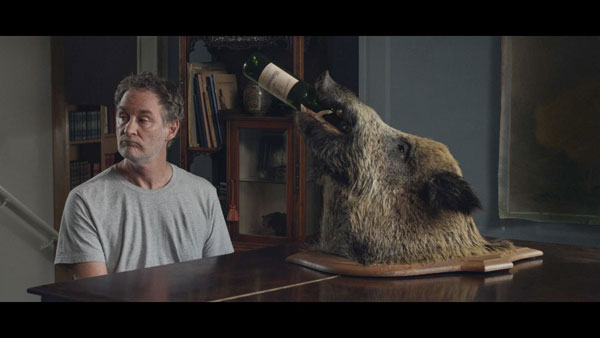 The strings-attached premise of My Old Lady is ripe with darkly comedic possibility. Near-dissolute and in debt up to his neck, an embittered New Yorker, Mathias Gold (a fish-out-of-water Kline), spends his last dime to travel to Paris to claim an inheritance from his recently deceased father’s estate: a spacious two-story apartment in the fashionable Marais arrondissement, worth approximately 9 million American dollars and some change. For the down-on-his-luck Mathias, it’s the ticket to financial security and a better life. The hitch? The current occupation of the premises by Madame Girard, a stubborn 92-year-old British expatriate (Smith), and her unmarried daughter (Scott Thomas), pursuant to the centuries-old real estate transaction known as viager, the Gallic version of a reverse annuity mortgage. Under this arrangement, the seller of the property (here, the titular old lady) receives a down payment and regular cash installments for the remainder of her life while retaining the right to continue to live on the premises until she dies. You can picture the desperate Mathias scheming imaginative ways to dispense of this nonagenarian obstacle to his deserved happiness in the Ealing Studios tradition of Kind Hearts and Coronets or The Ladykillers. When la vieille femme raises her wine glass and toasts to good health and a long life during their first meal together, the teetotaler Mathias is speechless, but you know what he’s thinking. If she would only drop dead ….

Unfortunately, My Old Lady takes a different path from those Fifties British comedies with devilishly black hearts. Based on first-time feature film director Horovitz’s play of the same name, it becomes an extended psychotherapy session for Mathias, who whines and whines about his dead, cold-hearted daddy as he downs wine after wine straight from the bottle. It’s a pity party to which you’d like to RSVP an unequivocal “no.” Though Mathias’ circumstances are tragic, Kline isn’t the actor to pull this off, try as he may. Playing the object of his derision, Smith spends most of her time justifying the past infidelity that has wrecked the lives of both Mathias and her daughter, whose initially icy demeanor toward the household interloper improbably thaws the less attractive Mathias becomes. It’s a pity that Dame Maggie has little opportunity here to do what she does best. Instead of a brittle bite into a fresh lemon tart, you get the labored chew on a stale croissant.