James Gandolfini’s wintery silences and bitter outbursts are enough on their own to merit seeing this otherwise frustratingly vague slice of low-end Crooklyn crime life, but just barely. Love it or leave it, this is Tony Soprano’s swan song and, fittingly, Gandolfini’s role as Cousin Marv, a beaten-down dive bar owner who owes his neighborhood Chechen mafia a lot more than a fistful of dollars, is memorable in its weary grace notes. The Drop is adapted by Dennis Lehane from his own short story (“Animal Rescue”), and it feels like a short story in ways both good and bad. It’s tightly wound, concise, and compact like Tom Hardy’s taciturn bartender Bob, but motivations and allegiances – between the churchgoing barkeep and the righteously Catholic detective (Ortiz), who comes into play after Marv’s bar is robbed at gunpoint one night, for instance – feel merely shaded in. That robbery sets off a chain of events that never fully reveal themselves until the film’s staccato ending, by which time you’re either fed up with the miniscule crumbs of information Lehane has chosen to dole out, or you’ve sussed out the characters’ shadowy backstories on your own.

The real reason to catch The Drop is Hardy’s mesmerizing turn as Bob, one of life’s strays who, in a titanic clash of metaphors, discovers a savagely beaten pit bull pup in a trash can and adopts him as his own. (It’s no coincidence that Bob carries himself like a whipped cur half the time.) It’s difficult to reconcile Hardy’s role here alongside the bombastic Bane of The Dark Knight Rises or the forthcoming Mad Max: Fury Road, but it’s good to know his command of the screen doesn’t necessarily require blood and thunder and monstrous spectacle. (Although, this being a Dennis Lehane script, there are a handful of vengeful gunshots to be fired off before it’s all over.)

It seems everybody is somebody’s woeful, misbegotten dog here, even Noomi Rapace’s Nadia, the wary neighbor into whose garbage can the aforementioned pup was deposited. By whom? Local crazy Eric Deeds, rumored murderer, sociopath, and – natch! – Nadia’s ex. Rapace does well in a role that, frankly, doesn’t consist of all that much, and as Deeds, Schoenaerts muzzles some of the madness he displayed in Drafthouse Films’ Belgian import Bullhead (also directed by Roskam) to grim and grimy effect.

For all its scabby-edged brio and canine existentialism – everyone is in a cage of their own design at some point – The Drop falls just shy of genuine neo-noir nastiness. It barks, it even bites, but it fails to draw much blood from the viewer. 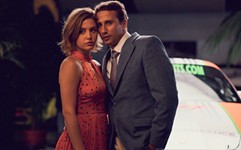 Racer and the Jailbird
Euro crime drama skips a gear in its switchback action.