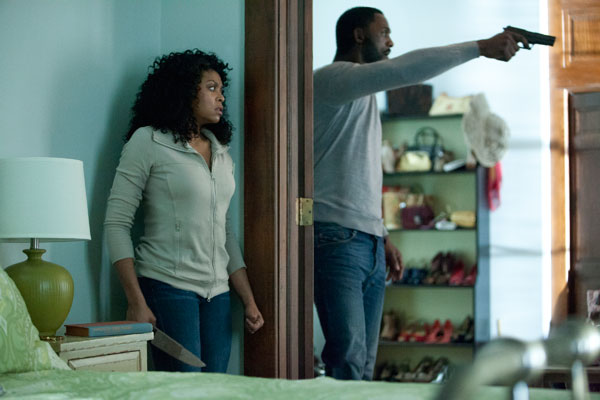 Just how lazy is No Good Deed, the latest entry in the home-invasion/woman-in-peril subgenre? Well, for starters, it dusts off that tired metaphor of a big storm approaching just as Colin (Elba), a convict who’s been denied parole, escapes from a prison transport van. After he was convicted of killing a man in a bar fight who looked too longingly at his fiancée (yeah, it’s that kind of movie), the parole board sees right through Colin’s reformed posturing to the “malignant narcissist” (Erich Fromm represent!) he really is. Colin then tracks down his (now ex-) fiancée, breaks her neck on the spot, and heads off into the night, rain and lightning accenting his rage and psychosis, that is when the camera’s not doing some stupid, blurry freak-out to convey the same.

Across town, Terri (Henson) is a stay-at-home mom with two kids, a shitheel lawyer husband Jeffrey (Simmons), and a randy college friend Meg (Bibb), who lives down the street. When Jeffrey announces he’s going on a weekend golf trip with his dad (um, sure), Meg is all “girls’ night!” and who should come a knockin’ before that first glass of Cab is poured? Why, it’s Colin, with car trouble no less, and man, is this storm raging or what?

Terri lets Colin use her phone, and subsequently invites him into her house, which is the “good deed” of the title. The resulting cat-and-mouse game that ensues is so utterly tedious that a broken car alarm figures as a major plot point. When Meg gets a shovel to the face, you can almost see the relief in her eyes that she doesn’t have to be in this movie anymore. Terri’s kids may as well be mannequins that she shuffles from room to closet to car and back again, for all the dramatic weight they hold. The film’s press materials tout a game-changing third-act plot twist, but I’m not sure you can refer to something as a plot twist when it is both a) heavily foreshadowed throughout the entire movie, and b) a logical progression of a story that has been done a thousand times better in scores of Lifetime productions. No Good Deed slouches toward its inevitable conclusion much like that rough beast to Bethlehem, falling apart and lacking all conviction.