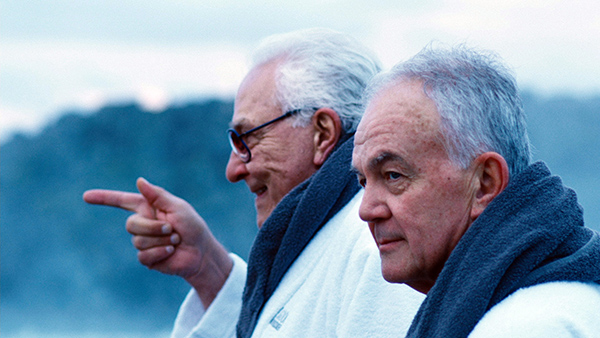 It may be that we’ve entered a new phase of the road movie, one in which the ride is all that matters, rather than the destination or the progression of the characters (in both the literal and figurative sense). I’m thinking about movies like The Trip and The Trip to Italy, which featured funnymen pals, Steve Coogan and Rob Brydon. It’s enough to be backseat voyeurs to their travels as they go hither and yon, engaging themselves as well as audiences via their personalities, instead of their adventures and vivid experiences. Land Ho! belongs to this type of road movie: We’re happy to go along for the ride with the film’s odd couple, who make for interesting character studies – and, besides, the scenery is stunning. Just don’t expect that much will have been accomplished or changed by the time the curtain closes.

Mitch (Nelson) and Colin (Eenhoorn) are ex-brothers-in-law, whose wives were sisters. Mitch’s wife died a while ago, and Colin is recently divorced. These men of retirement age are a study in contrasts: Mitch, a gregarious and randy retired surgeon, and Colin, a reserved musician-turned-accountant, still smarting from the dent in his budget caused by alimony payments. Even these men’s acting styles are different: Nelson is a nonprofessional who gets by on his force of personality, Eenhoorn is a veteran actor who can convey as much with his silences as with his conversation (for a grand display of Eenhoorn’s talent, seek out the festival favorite This Is Martin Bonner). Mitch has decided to treat the two of them to a vacation in Iceland, and though Colin is reluctant to accept the gift, Mitch is the kind of guy who won’t take no for an answer.

So it’s off to Reykjavik, where Mitch, in another oversized gesture of generosity, rents a big Hummer for their trip to the countryside. First they go for meals in the city, where Mitch inappropriately hits on all the young women. Soon, a niece of Colin’s, who is backpacking through Europe with a friend, meets the men for more meals and some nightclubbing. Once out of Reykjavik, the vistas and scenery become breathtaking, the men have some other encounters, and then, after 90 minutes or so, the movie just stops. Perhaps the travelers have reached a state of renewal, and while that’s nice to imagine for men who are no longer young, the fact of the matter is that the film really has no conclusion.

Co-directors Martha Stephens (Pilgrim Song, Passenger Pigeons) and Aaron Katz (Cold Weather, Quiet City), are SXSW regulars, who’ve made a habit of having their films premiere at the annual fest. Katz also served last month as a juror for the AFS Film Grants. Additionally, credited as one of the film’s executive producers is David Gordon Green. All are filmmakers who find lyricism in natural elements, and this ability reaches an apogee with Land Ho! Yet the film runs the risk of being mistaken for a picture postcard.