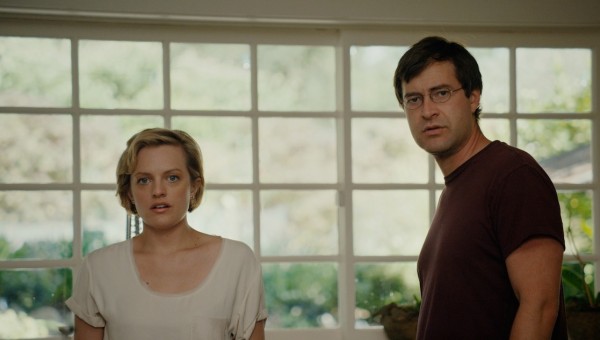 At some point before the start of the film, Ethan (Duplass) and Sophie (Moss) were a happily married couple. Now, however, they are in a therapist’s office trying to regain their mojo. Happiness for them has become a hard thing to rediscover, and the therapist (Danson, who is also the stepfather of director McDowell) offers nothing but the usual bromides. Making no discernible progress, the therapist shuffles through a pile of papers on a corner shelf and pulls out a brochure for a nearby vacation spot. He tells Ethan and Sophie that he has sent numerous clients there and they have all come back … “renewed.” He takes a long pause before that last word, “renewed,” but we really think nothing of it and chalk it up to L.A. psychobabble.

Off they go, and the bucolic Ojai setting instantly lifts the couple’s spirits; a joint upon arrival further lightens their mood. There might be hope for them after all – but then they start exploring the separate guest cottage on the premises. To say much more here would strip the film of its mystery. Suffice it to say, that The One I Love is a rom-com-dram – with a twist.

Duplass and Moss are both intriguing performers, who get to do much more here than in their recent TV work (The Mindy Project and Mad Men, respectively), and who are said to have improvised much of this film’s dialogue. Their relationship rings true, and they are quite enjoyable to watch. Unfortunately, someone (screenwriter Justin Lader, perhaps?) needed to improvise some kind of satisfying denouement because the film’s third act just collapses in on itself. The One I Love is imaginative and provocative until … until it isn’t.

See “Two Guys, a Girl, and a Puzzle Piece,” Aug. 29, for an interview with Mark Duplass and Charlie McDowell.

READ MORE
More The One I Love 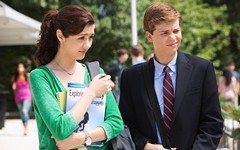 DVDanger: How to Date in a Sci-Fi Universe
Premature and The One I Love probe romance

More The One I Love