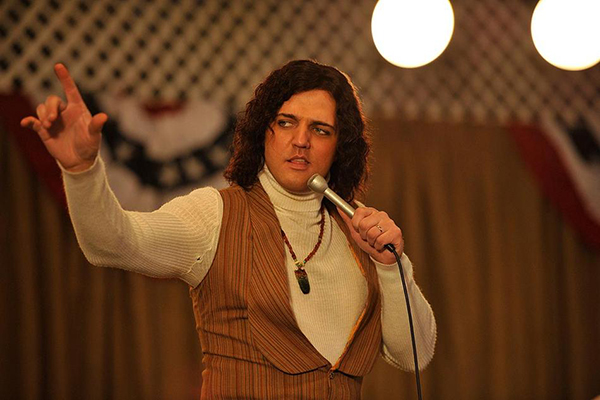 The legacy of Elvis Presley weighs heavily on The Identical, although the King is only mentioned once. Rather than obtaining the life rights to make a proper biopic, the makers of this laughably earnest fabrication presuppose that the rock & roll legend’s stillborn twin brother had in fact survived and gone on to achieve fame as … a professional Elvis impersonator.

We begin in the Thirties as the strain of the Great Depression prompts poor William and Helen Hemsley (Geraghty and Crew) to surrender one of their twin newborns to the reluctant care of Reverend Reece Wade (Liotta) and his sterile wife (Judd). Jump ahead to the Fifties, and young Ryan Wade (Rayne) finds himself in the grip of honky-tonk temptation as he draws constant comparisons to rising star Drexel Hemsley (also Rayne), much to the Reverend’s dismay.

If Rayne weren’t such a blank slate in his offstage scenes, maybe it wouldn’t matter that first-time director Dustin Marcellino and co-producers Jerry Marcellino and Yochanan Marcellino (music industry vets responsible for the film’s bland sound-alike songs) can’t decide which kind of movie they’re making: an unauthorized tribute to Elvis Presley, a star vehicle for one of his dead ringers, the umpteenth cautionary tale about the perils of stardom, or an old-fashioned melodrama about clashing fathers and sons.

Instead, the film skirts along each thread much as it skims through each decade of the era, changing haircuts with every montage and placing more emphasis on the Six-Day War of 1967, for instance, than either World War II or Vietnam. Evidently made with deep pockets but muddled intentions, The Identical is a folly largely unworthy of its hidden idol.