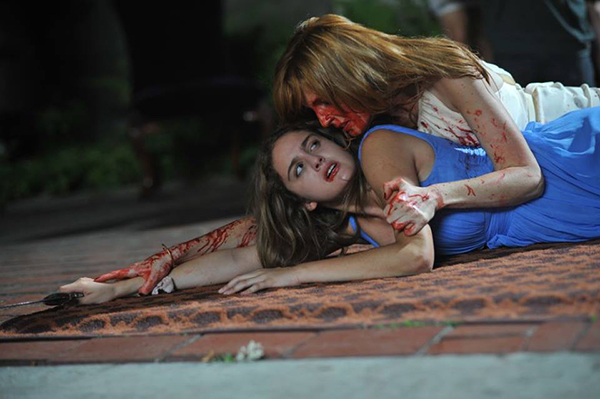 I haven’t read Jane Mendelsohn’s novel, but this film version, apparently, dispenses with the author’s more transgressive notions – crones replenishing themselves on the menstrual blood of virginal, boarding-school girls – in favor of a bloodless and deathly dull portrait of a sweet, albeit damaged, young woman mired in the mundanities of prep-school life. Saturated as it is with (possibly unintentional) cinematic references that its tween-age target audience mostly likely won’t notice – the thumbscrew paranoia of Rosemary’s Baby, various Dario Argento films (chief among them Suspiria), and the far superior Ginger Snaps series – Innocence certainly has all the right genre conventions to toy with, but the haphazard script by Brougher and Tristine Skyler is a bloody mess.

Sophie Curtis, looking very much like a young Alicia Silverstone but clueless in all the wrong ways, plays Beckett Warner, the daughter of a famous writer (Roache, seemingly acting in some other, worse, movie), who, after the drowning death of her mother, is sent away to Elizabeth Báthory’s boarding school for girls (alas, not its actual onscreen name, but still …).

Almost immediately, Beckett’s father hooks up with feline school nurse (Reilly, adding much-needed oodles of sensual evil until the ridiculous third act), a succession of in-school “suicides” is uncovered, and everything falls apart, most notably the story’s core logic and the audience’s patience.

What’s worthwhile, if anything? The soundtrack by tomandandy is a fine, atmospherically nuanced score that’s more unnerving than any of the action (or lack thereof) onscreen; director of photography David Rush Morrison adds what little suspense there is via some unique camera setups; and, thankfully, Innocence is only 96 minutes long. Yes, it seems like double that, but then, so did high school. Yawn.