That most of us will turn out not to be geniuses is bitter pill enough to swallow. But crueler yet is to be adjacent to genius, breathing the same air, but with none of that brilliance transferable. A likable but ultimately slight arthouse comedy, Frank measures the toll such close proximity to greatness takes on a lesser man.

Jon Burroughs (Gleeson) is a British office drone with pop-star aspirations who stumbles quite by accident into a gig playing keyboards in an avant-garde band with an unpronounceable name. Frank (Fassbender) is the band’s frontman, a volatile but kind-hearted prophet and living piece of performance art. He wears at all times (onstage, in the shower, and so on) a giant fake head, oval-shaped like an overturned egg. Forever locked into a cartoonishly blank expression, Frank will transcribe his hidden facial movements to his bandmates – “flattered grin, followed by bashful half-smile” – but as Jon’s confidence and delusions of grandeur grow, he becomes less occupied with understanding Frank’s inner thoughts and more so in exploiting Frank as his ticket to stardom.

British journalist Jon Ronson and co-writer Peter Straughan have fancifully adapted Ronson’s memoir about touring with the real-life performance artist Frank Sidebottom, né Chris Sievey (the film’s fake head is a near replica of Sidebottom’s distinctive dome). But the screenwriters have curiously sanded down Ronson’s own sharp-witted, terrifically dyspeptic public persona. The doppelgänger for the movie’s Jon is an uninteresting simp; he’s Almost Famous’ journalist-naif, sans the innate charisma or intelligence.

Jon is the audience’s proxy, but you can’t help but crane your neck to get around him, to the more marquee attractions. Fassbender’s pure physicality and voice modulation elevate what might have been just a goof (look ma, no face!), and Gyllenhaal – playing Frank’s Yoko and fellow bandmate, an imperious bitch with a switchblade and admirable code of honor (“stay away from my fucking theremin!”) is both the film’s most consistent source of comedy and its true-blue beating heart.

The script eventually starts to scrap honestly with mental illness. (At least two of the band members meet in a mental ward, and its keyboardists keep trying to drown themselves.) But director Lenny Abrahamson establishes a twee tone early that renders tinny the transition into melancholy, and it’s a shame the film so clings to Jon’s perspective. The takeaway is as flat as Frank’s mask. Bemused smile, followed by deflated feeling. 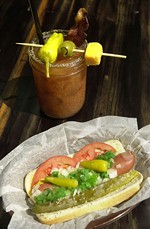 Frank
Artisan sausage debuts in Austin, all wrapped up in bacon 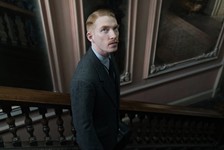 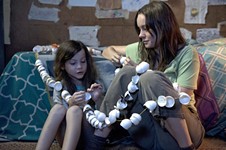 Room
Emma Donoghue's screen adaptation of her bestseller is a knockout