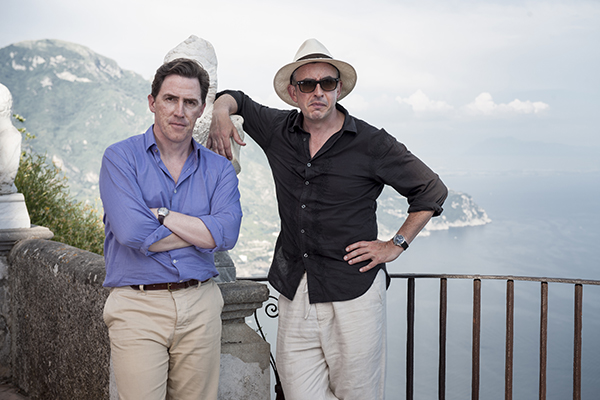 The Trip to Italy

The premise is deceptively simple: A couple of British gents on the cusp of middle age tour Italy in a Fiat convertible, wining and dining their way along the Boot in a travelogue of breathtaking beauty accompanied by the endlessly entertaining chatter of two best friends forever. Little drama transpires during this Roman (and Tuscan/Sicilian/Amalfi) holiday – a moment of infidelity here, a reconnection with a teenaged son there – but you’re nevertheless enchanted, not only by the magnificent scenery and mouth-watering food on display but more so by the relationship between this would-be Byron and Shelley. (Those doomed English Romantics, who tragically perished on foreign soil, are the frequent butt of irreverent jokes during the excursion, which tracks the 19th century poets’ travels along the Italian peninsula.) Call this bromance My Dinner With Steve, or With Rob), if you will. It’s a love story of sorts about two guys attached at the funny bone.

The Trip to Italy defies easy categorization, to say the least. As in its 2010 predecessor, The Trip, Coogan and Brydon once again play themselves with fictionalized components, as if existing in an alternate universe of reality television. Not surprisingly, each feature film was compiled from segments of a British TV series in which the two actors toured restaurants in a specific region.

With his short, graying hair and bemused expression of feigned aggravation, Coogan looks somewhat like a matinee idol (he favors the swashbuckling Stewart Granger), getting more handsome with each year. Luckily, his sense of humor hasn’t changed with time, wryly trading pointed barbs with his foil (and equal), an exuberantly goofy Brydon. When the two of them get on a roll, watch out – it’s a take-no-prisoners contest of wit and will, each improvisation intent on outdoing the other’s, especially when a woman is present. Impersonations of the famous abound, whether good (Sean Connery), bad (Clint Eastwood), or ugly (Gore Vidal). An imagined re-enactment of on-set events involving Michael Caine, Christian Bale, and Tom Hardy during the filming of The Dark Knight Rises is both brutal and brilliant, exhausting every possibility like a gag you don’t want to end. And, of course, what trip to Sicily would be complete without dueling Brandos?

By the end of this affable little film, you’ll likely crave a bowl of fresh-made pasta in seafood sauce, a glass of Frascati, and a room with a view on the Amalfi coast. (Sigh.) It’s one big postcard for the Italian tourism industry. Better yet, however, The Trip to Italy will rekindle an appreciation for that special friend (or friends) with whom you can always be yourself, who knows how to make you laugh, who accepts you without judgment and without fail. It’s that person with whom you can blissfully spend time, whose company is effortless, who can make doing nothing feel like something. Il dolce far niente.