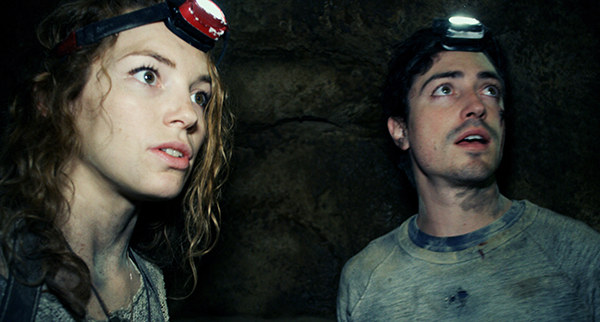 The real-world catacombs beneath the streets of Paris are an irresistible foundation for cinematic nightmares, combining death and darkness in lengthy limestone tunnels lined with the remains of some 6 million people. The little-seen 2007 dud Catacombs already squandered such promise, but the Dowdle brothers (Devil, The Poughkeepsie Tapes) have decided to give it another go with As Above/So Below.

However, this being a modern, low-budget horror effort, director John Erick and co-writer Drew have adopted the all-but-exhausted “found footage” angle with which they had previously made their [REC] remake, Quarantine. Documentarian Benji (Hodge) has trained his camera on urban archaeologist Scarlett (Weeks) as she continues with her late father’s quest to find the Philosopher’s Stone. (Ring a bell, Harry Potter purists?) The quest takes her from Iranian caverns to the aforementioned Parisian catacombs, roping in some reckless locals and a former flame (Feldman) along the way.

Their off-map exploration blends the subterranean torment of The Descent with the supernatural guilt-trip of Event Horizon, with characters meeting their own inner demons in the shadows rather than actual ones. One would think that the prospect of crawling across passages covered in bones and the appearance of an odd, cult-like choir might set the claustrophobic mood sufficiently, but it isn’t long before the crew is greeted by a ringing phone, a burning car, and other totems of their respective pasts.

Motivated by a combination of scholarly curiosity, lingering grief, and basic survival, Scarlett leads the charge downward, but the Dowdles’ decision to have the characters greeted by strange occurrences early on makes the prospect of descending into hell itself seem disappointingly tame in comparison. Then again, it’s tough to get too worked up at any point, as a series of head-mounted cameras whip between fleeting figures and panicked faces throughout, with all the tension of a jittery recording of a trip through your local haunted house.

A midpoint inversion sees many of the film’s sets intentionally recycled, causing the proceedings to feel that much more belabored, and Scarlett’s hasty emotional reckoning sticks out as an arbitrary bout of psychotherapy tossed in among so much incoherent mayhem. While its characters attempt to go deeper, As Above/So Below’s stabs at scares and sentiment only seem that much shallower. 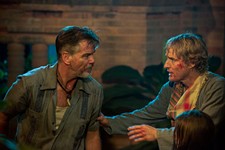 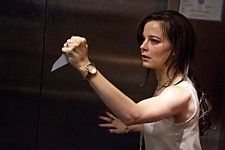 Devil
A group of strangers takes a ride with the devil on an elevator to hell.