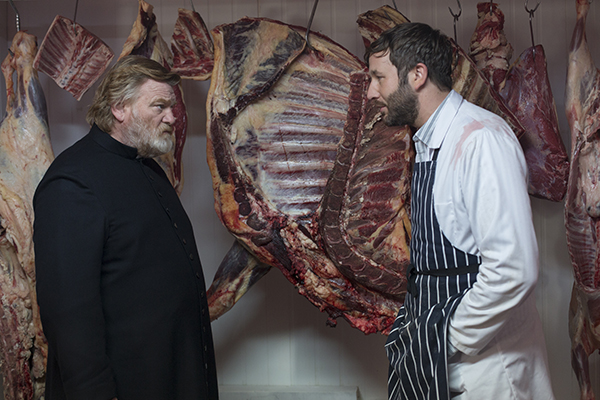 Named after the hill Jesus was crucified on, and opening with a quote by Saint Augustine (“Do not despair; one of the thieves was saved. Do not presume; one of the thieves was damned.”), Calvary makes clear its intention from its opening moments. Father James (Gleeson) sits in the confessional of his church in a rural town in County Sligo, Ireland. An unseen man arrives and tells the story of his sexual molestation by a Catholic priest that lasted for five years, starting when he was 7 years old. That priest being long dead and gone, the vengeful man has decided that he will kill Father James instead, as targeting an innocent clergyman will have a bigger impact. Given a week to put his affairs in order before a rendezvous at the beach, it seems that Father James will spend that time ferreting out the potential murderer amid his flock of parishioners.

And what a flock they are. There is the cynical doctor, the bitter harlot, the rich alcoholic, the creepily sullen youth, and the dim-witted, cuckolded butcher, and that’s just for starters. They’re not so much characters as composite archetypes, each and every one flaunting their sins and transgressions in front of Father James, most of the time to his face. Early on, Father James reveals that he knows who the potential killer is (it is a small town, after all), but the audience remains ignorant, parsing the clues from the red herrings, and Father James goes about his days, becoming increasingly unnerved as his impending demise looms closer.

With Calvary, John Michael McDonagh (who wrote and directed The Guard and is the brother of Martin “In Bruges” McDonagh) has crafted a darkly hilarious and deeply ruminative update on the passion play. The dialogue cleverly bumps up against the fourth wall, and the religious and moral conflicts are exactingly played out. But make no mistake, it is Gleeson – seen in practically every frame – who carries this film. One of the best actors working today, he imbues Father James with soulful humanity and a sardonic wit. He is the merciful center of a film surrounded by willfully rotten characters. Calvary resembles Bresson’s Diary of a Country Priest reimagined by Peckinpah. Cruel and laced with pitch-black humor, it is a film that will needle its way into your psyche; removing it may prove difficult. 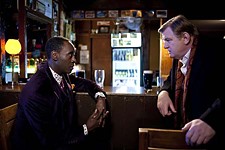