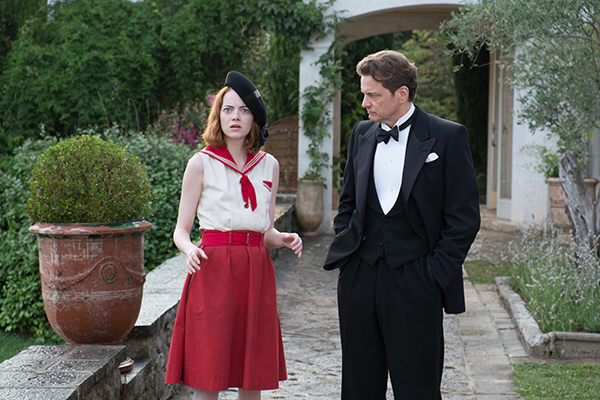 Magic in the Moonlight

When we first meet Stanley (Firth), he is wowing a Berlin audience as his alter ego, Wei Ling Soo, a Chinese illusionist whose grand finale is making an elephant vanish. The year is 1928, and Stanley’s old magician pal Howard (McBurney) meets up with Stanley backstage, seeking his help. A rich American family has seemingly been put under the spell of a gold-digging mystic named Sophie (Stone), and their fortune is in jeopardy because the heir, Brice (Linklater), is so besotted with her that all concerned fear he may propose marriage. Howard is flummoxed as to how Sophie pulls off her séances, and pleads with Stanley to accompany him to the Côte d’Azur to debunk Sophie’s otherworldly skills. Stanley is more than happy to oblige, since he considers himself to be the very embodiment of rationality. He’s also a supercilious misanthrope who is prone to long-winded monologues – in other words, the usual Allen proxy. When Sophie’s supernatural powers in unveiling secrets has even Stanley believing her, the illusionist sees the walls crumbling around his castle of pragmatism, and questions whether there might be magic (and romance) in the world after all.

Those expecting a charming bonbon à la Midnight in Paris may wish to lower their expectations. Magic in the Moonlight’s story is exceedingly threadbare, a first draft that never got fleshed out or tightened up. Firth’s performance works – this is Mr. Darcy we’re talking about here – but Stone is often left with nothing to do except shimmer amid the beautiful cinematography of Darius Khondji. The theme of the rational vs. the spiritual is one Allen has grappled with for most of his career, with much better results. It’s pretty evident that as long as he keeps attracting European financing, Allen will continue to mull them over in whatever agreeable locale suits his fancy. So, left with the travelogue eye-candy of the south of France and plot twists that question the meaning of that phrase’s definition, one has plenty of time to ponder the casting of Firth, 53, as a romantic partner to Stone, 25. Ah, that’s where that elephant went.