Wish I Was Here

I’m not one of Garden State’s belated haters. Zach Braff’s of-the-moment picture of generational anomie and mid-Aughties, mass-appeal indie film mores was pretty on point. But a decade’s gone by now, and things change. Has Zach Braff?

Much as his directorial debut took the temperature of a certain kind of twentysomething circa 2004, Wish I Was Here clearly wants to impart something just as thumping about what late-30s life is like, troubled by unruly kids, ailing parents, and creative aspirations complicated by financial realities. Braff has an ever-clever eye for observational humor, but too often the script (written by Braff with his brother Adam) feels reverse-engineered to manufacture would-be iconic imagery. Every conversation comes trick-loaded, so that when surfing, a swear jar, and a sheitel are name-checked, it’s preordained each concept will conclude in a slo-mo, trailer-made shot scored to an obsessively pruned Spotify playlist. That swear jar, improbably lugged around in public places and primed for the shattering, grates the most; it’s Chekhov’s gun maxim retooled for maximum twee effect. And while we’re talking verisimilitude: Those of us without children, or who are at least ill at ease with real kid talk, are apt to resort to a special voice – uncertain, schoolmarmish, inflecting upward into a question mark, like we’re nervously trying to educate a short-tempered dog that might lunge at any second – and Braff uses that exact voice with his screen kids. Of the ongoing fantasy motif/metaphor that puts Braff in a spacesuit with an alien/robot sidekick hovering at his shoulder: I can’t find the words for the wince. It’s the worst.

Still, Wish I Was Here has its moments of transcendence. They don’t involve Braff, who starts the film as an unshaved sarcophagus of bile and glibness – a brittle act he swiftly drops in favor of a too-cuddly portrait of waywardness. But as a writer/director, he’s cherry-picked the best of his ensemble cast to chew over the topic of religion – the young actress Joey King, who plays his observant daughter, and Mandy Patinkin, as his cancer-riddled, Orthodox Jewish dad. A theatre-trained actor with enough film smarts to know you don’t always have to project to the rafters, Patinkin owns the movie with a sotto voce bedside chat with Kate Hudson (as Aidan’s pacific-grin wife) that is beautifully performed – a scene that’s especially effective for its restrained camerawork. Patinkin and King’s characters’ wrangling with spirituality is sincere, and specific. Everything else in this everything-and-the-kitchen-sink film feels like too many ideas stored up over an especially long winter. 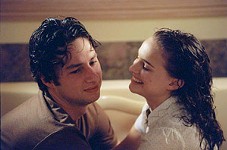 Garden State
A mash note to love that speaks to Generation Y as powerfully as The Graduate did to the Boomers.