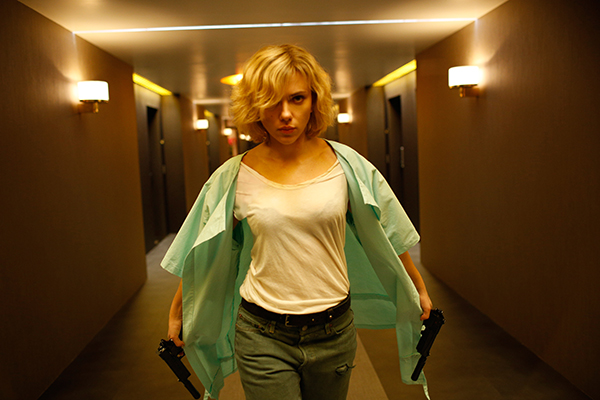 When a beloved talent goes off the rails, invariably a return to classic form is to be wished, although that rarely happens. Still, sometimes there can be a re-eruption of vision in an unexpected way. Among my all-time favorites, Besson’s best films are taut – cinematically explosive, skillfully plotted, fantastic narratives. But when was his last great film as a director: The Fifth Element in 1997?

Lucy is a glorious mess, a film that casually wanders through a variety of genres. Which is fine. Besson can mosey wherever his fancy takes him because few films are so deliriously anchored by a performance as this is by Scarlett Johansson’s.

Set up by her boyfriend, Lucy (Johansson) is forced to become an unwilling drug mule when a dangerous Asian cartel surgically inserts a stash of a new, secret superdrug into her body. Her life threatened, she is forced to go along to transport her stash. When she is beaten up and kicked by other captors, the packets of drugs burst. Almost immediately the somewhat overwhelmed Lucy begins to evolve into a human being who can exercise 100% of her intelligence.

In a charming but clumsy manner, we are set up for the whole story early on by intercuts to a lecture by professor Norman (Freeman) on brain capacity. The hoariest gambit imaginable, having a voice within the film actually give endless exposition, just shouldn’t work. Even worse is the nature footage Besson cuts in during the initial stages of Lucy’s “recruitment,” which features natural predators and their prey. The point is so blatantly made that the undead would get it. Yet rather than drooping into the pan where The Rocky Horror Picture Show forever dumped such narrators and narrations, somehow it works. The MacGuffin becomes so clearly spelled out that the film can dance off in many directions as Lucy’s expanding capacity keeps elevating her abilities. She develops ever-new skills for violence and exercising control.

The best comic-book movie in a long time, though based on no comic, Lucy is a film that mates classic Besson with Quentin Tarantino in a go at the mystical, world-solving vision found in Stanley Kubrick’s 2001: A Space Odyssey and Terrence Malick’s The Tree of Life. Rendered just as cosmically as those two but far more grounded in pulp, it is less spectacular, though oddly more definitive. A daring, giddy joy ride of an adventure, Lucy races along, leaves a swirlingly confused trail behind it, as it tracks a single intelligence that’s rapidly evolving from human to universal.