A journeyman director at best, Brett Ratner has made thoroughly competent contributions to the genres of buddy comedy (the Rush Hour trilogy), Capra-corn (The Family Man), ensemble caper (Tower Heist), crime thriller (Red Dragon) and superhero sequel (X-Men: The Last Stand). With Hercules, he sets his sights on the historical epic, delivering a big-budget adventure indebted more to cornier sword-and-sandal movies of yesteryear than the exaggerated bloodshed and sepia-toned abs of 300 and its countless knock-offs (including January’s crummy The Legend of Hercules).

Anyone expecting a Clash of the Titans-like fantasy, however, has the marketing to blame. The beastly money shots littered across trailers and TV spots are served up as a swift prologue to the actual story, in which the much-heralded Hercules (Dwayne “The Rock” Johnson) has welcomed the overblown retellings of his 12 labors. In truth, he is not a lone demigod, but a gold-seeking mercenary eagerly leading his team of archetypal sidekicks – the surly comrade (Sewell), the young hype-man (Ritchie), the tomboy archer (Berdal), the mute madman (Hennie), and the sarcastic seer (McShane) – into combat.

That notion of mythic deconstruction is the single most intriguing element of Ryan Condal and Evan Spiliotopoulos’ comic-based screenplay, but the Liberty Valance “print the legend” angle is soon abandoned in favor of traditional derring-do, constant quips, and exotic locales, as Hercules and friends are enlisted by Lord Cotys (Hurt) to track down the rogue Rhesus (Santelmann). To that end, Ratner has fashioned an adequate action-adventure around Johnson’s horse-heaving he-man, a hero who’s still larger than life even after the legend has supposedly been stripped away, and until a digitally bombastic finale, the battles carry the welcome weight of actual stunt work while pushing the limits of the PG-13 rating with the detached limbs, heads, and so on.

If anything gets lost in the mayhem, it’s Johnson’s reliably charming personality. His Hercules is saddled with a predictably tragic past, and as a blunt force burdened with trauma, his natural charisma is consistently tempered by the material (still putting him leagues above Legend’s buff-but-bland Kellan Lutz). Perhaps the star was looking to flex some less obvious muscles for a change, but his well-established appeal might have been strong enough to elevate this vehicle above the level of marginal matinee fare. 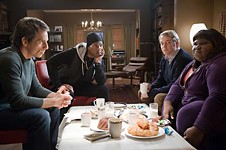 Tower Heist
Sensitive to the zeitgeist of the moment, this Brett Ratner film with the A-list cast is a real people-pleaser.