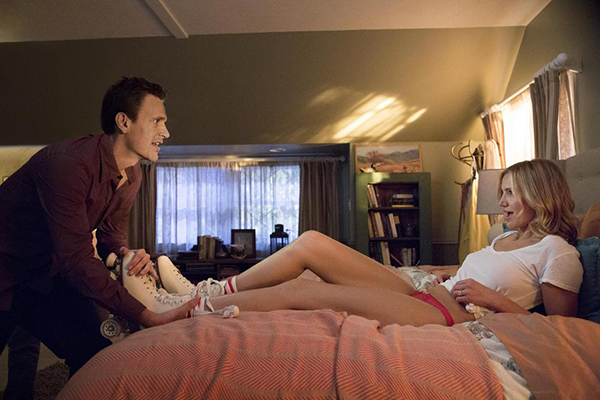 Annie (Diaz) and Jay (Segel) are a married couple trying to rekindle the spark of romantic love in the bluntly titled Sex Tape. In college, they had an energetic, fulfilling sex life. But careers, children, and the usual bourgeoisie tropes came creeping in, so one drunken evening, they decide to make an epic, three-hour document of their carnal knowledge on Jay’s iPad, re-creating all the positions of Seventies perennial The Joy of Sex. No big deal, right? Just a personal sex video on an electronic device that no other human will ever see, ever.

Not so fast! Jay works for a radio station or something, because there is a scene in a radio station where Jay is lamenting his nonexistent sex life to a deejay. Then someone hands Jay some iPads and says, “Here are some iPads for your radio station job!” Jay goes through so many iPads, he gives them away to everyone he knows. So all of Jay’s friends and family, and also Jay’s mailman (because running joke), have Jay’s old iPads synced together on the “cloud” so Jay can continue to update and share his amazing music playlists. And now everyone has the sex tape.

Meanwhile, Annie writes a blog about being a parent and is brokering to sell her mommy blog to a big corporation for a lot of money (does this happen in real life? I’m pretty sure this doesn’t happen. A Google search for “mom sold blog for big bucks” proved inconclusive). So, of course she gives an iPad to her potential new boss, Hank (played by Rob Lowe, whose joke-casting will likely go over the heads of anyone born after 1990) because it has her blog on it, or some awesome slideshow of her children, maybe. When it becomes apparent, through sinister anonymous texts, that their sex tape is being used as a means for blackmail, an all-night odyssey of bumbling retrieval ensues.

Except, it doesn’t. Midway through the film, the concept of remote deletion dawns on the protagonists, thus making most of their actions extraneous. Sex Tape goes to great pains to establish its premise and intention, but the film fails in the two main tenets it should be trafficking in: being funny and being raunchy. It is a bland, clawless comedy; a cautionary tale of a high concept gone horribly, horribly wrong.