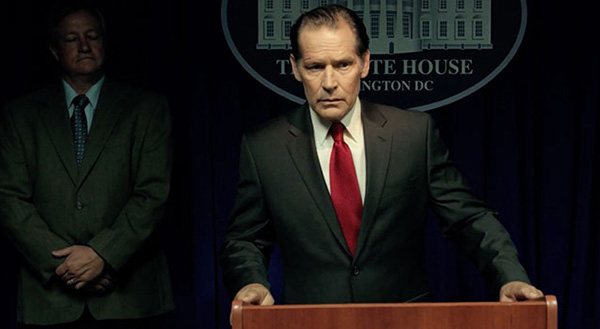 Persecuted is a profoundly conservative, Christian ideological take, guised as a classic Seventies paranoid thriller. Certainly unique, this is another targeted release, specifically aimed at groups sharing its beliefs.

Famed evangelist James Luther (Remar) stubbornly and courageously refuses to endorse the Fairness in Religion bill sponsored by Sen. Harrison (Davison), which will legally grant all religions the same status and protections.

This would seem innocuous enough, at worst more Constitution-weakening nonsense from the knee-jerk left, but no, the bill’s supporters are completely amoral and vicious schemers willing to do anything to get their way. Rather than a plea for equality, the legislation is part of a far more deadly and pervasive war on Christianity. The ultimate goal is the destruction of civilization as we know it, though that extreme is implied not stated. Furthermore, why this is desired, except by hearts of pure evil, is never broached.

Luther's refusal to go along evidently significantly lowers the bill's chance of being passed. Thus Harrison orchestrates an elaborate scheme in which Luther is framed for rape and murder. All steel and passionate religious conviction, determined to clear himself, rather than turn himself in to the authorities, Luther goes on the run. Although always very consciously articulating its religious purpose, here the film slips readily into The Fugitive mode.

Stylistically, in fact, the entire film seems directly cut from the cloth of Hollywood’s paranoid thrillers of yore, though those works usually leaned leftist. This variation is fascinating, especially because, as with those predecessors, the threat is not coming from the underworld or foreign enemies, but our own government.

Persecuted matches its conservative beliefs to an anachronistic narrative structure and dated cinematic execution (time-lapse shots of traffic used to evoke the dizziness of the modern world). More creaky than fluid, the film still has certain charms, not the least of which is its aggressive if somewhat muddy ideology. Ultimately, it runs aground on the same dilemma that so often besets the genre. Initially, the conspiratorial evil powers are presented as all-pervasive, controlling, and manipulating the world. Winding its way to a climax, the film tightens its focus to a handful of villains in order to allow for narrative resolution.

Persecuted will play well only to its choir – sympathetic, conservative Christians. Sorry, but the film is very clear as to whom its title refers. The implication, at least, is that those not so suffering may well be inflicting. 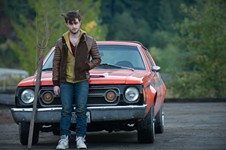 The FP
This potential cult-movie masterpiece is likely the most original dance film you'll see this year.