The development of personhood as it is experienced – day by day, year in and year out – is the subject of Boyhood. In this sense, Richard Linklater has created the ultimate coming-of-age film, one that transcends the usual constructs of the genre, which often posits one big event or trauma as the kick-in-the-rear that propels a character toward maturation or a greater sense of the world beyond oneself. Linklater’s newest film, a true masterwork, eschews this big-bang theory of dramatics in favor of the million-and-one little things that accumulate daily and help shape who we are, and who we will become. Childhood is particularly rife with these developmental moments, but the process never stops – not really, if you’re a sentient human being.

Much has already been written about Boyhood and its 12-year process of filming in small bursts of a few days at a time over a dozen years. The boy of the title, Mason Jr. (Coltrane), is 6 years old at the beginning of the film, and 18 when it concludes with him going off to college. The changes we see in the boy over the years are most remarkable: The baby fat gives way to a lanky young man, and Mason develops from a child with little agency over his life into a thoughtful young adult with an artistic bent, ready to discover his life’s story. Yet Boyhood, by the very nature of its 12-year approach, also allows us to witness time’s effects on Mason’s family: his mother Olivia (Arquette), father Mason Sr. (Hawke), and older sister Samantha (Lorelei Linklater). Divorced prior to the beginning of the film, Mason’s parents, too, age before our eyes in ways that are emotional as well as physical. And as for casting his own daughter as the family’s older sister, Linklater has in a certain sense created a home movie in addition to a work of art.

For a movie that was filmed in fits and starts, Boyhood’s fluidity becomes all the more remarkable. There are no title cards or fades to black to indicate the passage of time. But from the get-go, we’re placed on a course to observe a child’s ongoing experience with making sense of the world he’s inherited. From the opening sequence in which Mason logically explains to his mother why he put rocks in his schoolroom’s pencil sharpener (much to his teacher’s consternation), to the end in which a passion for photography and a taste of psychedelics strengthen his perceptive abilities, Mason is constantly learning about himself and the world he inhabits – as do most of the other players in his life story.

Not only did it take a lot of trust for Linklater to undertake this project, which could have capsized in any number of ways over the years, credit must be given both to his cast for sticking with the film and carving out erratic but dedicated time in their schedules to make it happen, and to his distributor, IFC Films and its president Jonathan Sehring, for the unconventional financing, which offered no avenue for immediate gratification. The originality of Boyhood clearly extends beyond what we see up on the screen, and it’s this film – even more so than the career landmarks of Slacker and the Before trilogy – that will earn Linklater a place of immortality in the history books.

See “The Time of Their Lives,” July 18, for interviews with Linklater and Coltrane. 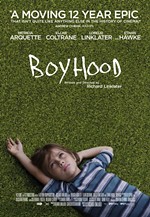 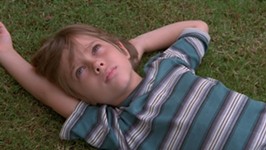