Here’s a handy checklist to determine if you are watching a Paul Haggis film: 1) There will be a shotgun blast of character introductions that seem unrelated except for that moment when they all do the same thing, and you think, “Everyone sure likes submerging things in water, I wonder if this will turn out to be a theme?” 2) There will be exchanges of dialogue between characters wherein the desires of the characters will be repeated multiple times using different vocabulary (this will happen many times). 3) There will be a soundtrack that does the emotional heavy lifting for you. 4) There will be characters in the film that adhere to a lowest common denominator stereotype, making it very easy to tell them apart (i.e., Ugly American, Untrustworthy Gypsy, Serious Writer, Lawyer Bitch). 5) There will be a moment when the characters realize that their suffering is a result of their previous behavior, followed by either a transcendent revelation or, more likely, death.

That basically sums up Third Person, a globe-trotting multistory meditation on love, betrayal, and lost/found children from the director of Crash. Neeson plays a Pulitzer Prize-winning writer in Paris, grappling with an estranged wife (Basinger), a protégé/lover (Wilde), and an unruly manuscript. In Rome, Adrian Brody succumbs to the honey pot allure of Moran Atias and ends up being the mark on a scam that any sensible human being would have walked away from after five minutes. In New York, a former soap opera actress (Kunis) tries to regain partial custody of her son from her ex (Franco), a world-famous artist who deals in abstract expressionist finger-painting. Connecting these threads will cost you two hours of your life, or you could just watch the trailer and figure it all out in three minutes.

Haggis is not a subtle filmmaker. He leaves no agency for the audience, and his facile construction of this story is condescending at best. The ensemble cast do their best with the material, but more often than not, they are left staring austerely into space as the camera slowly backs away. Potential viewers would do well to follow the camera’s lead. 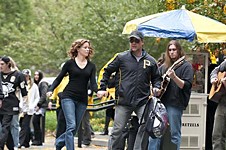 In the Valley of Elah
Paul Haggis and Tommy Lee Jones deliver a scorching film that's part police procedural, part family melodrama, and all about our national failures in Iraq.