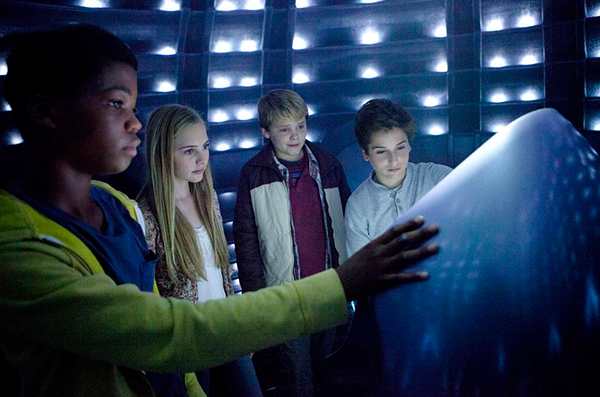 Stop me if you’ve heard this one before: A trio of suburban kids befriend an alien entity and must avoid parents and authorities alike in their mission to send it back home. Earth to Echo makes no secret of its foremost influences: E.T. the Extra-Terrestrial, *Batteries Not Included, and any number of similar adventures produced during Steven Spielberg’s Amblin heyday in the Eighties, with a little of his Close Encounters of the Third Kind and Joe Dante’s Explorers thrown in for good measure.

Modern movie-making being what it is, Echo also boasts the oft-distracting “handheld footage” angle, a gimmick only further perpetuated by the success of every Chronicle and Cloverfield, not to mention the simple budgetary appeal of not having to worry about pesky things like “coverage” or “coherence.” Despite the shaky-cam aesthetic, Dave Green’s first feature still makes for a brisk, appealing adventure capably anchored by four young actors.

Tuck (Bradley) is our intrepid videographer, encouraged to continue filming every moment around best friends Alex (Halm) and Munch (Hartwig) once the threat of eminent domain has forced their families to vacate their Nevada suburb. On their last day together, all three see their phones lit up by a mysterious beacon and they bike off into the nearby desert to discover its sender, a wide-eyed robotic alien they decide to name Echo. (Picture a cross between Wall-E and Clash of the Titans’ robotic owl sidekick, Bubo, and you’re pretty much there.) Of course, they’re not the only ones looking for him …

Echo operates at the crossroads between kids who still bike everywhere they need to go and kids who can never put down their phones, updating an old-fashioned journey with newfangled distractions. An after-the-fact framing device is meant to justify Tuck’s incessant narration, editing, and even music, and while that might suit both a self-involved generation and a wistful tone, the forced first-person perspective tends to distance the viewer from the action as much as the interactions between these close pals and the girl next door (Wahlestedt), who tags along mostly to suit the film’s need for a token female presence.

Thankfully, thin characterizations don’t stifle the naturally endearing performances from the four leads, with Hartwig getting the lion’s share of the laughs. (Regarding his reluctance to fake a sleepover alibi: “My mom just went through a divorce! She already has enough guys lying to her!”) Echo himself is a cute creation, speaking solely in beeps and always seeking out spare parts. Truth be told, it’s a fitting modus operandi given the magpie ways of the film that shares his name. Earth to Echo is a small-scale and squeaky-clean alternative to blockbuster bombast, about as unoriginal as it is fundamentally inoffensive.