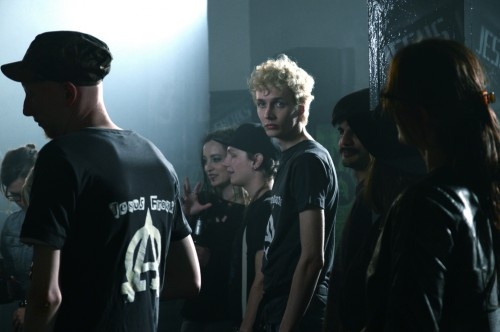 Nothing Bad Can Happen

For Tore (Feldmeier), having three words tattooed across his scrawny back – “Teach Me Lord” – is a proud display of his devotion. Others will read the mantra as an invitation to test the young Christian’s faith and flesh. For director Katrin Gebbe, the very title of her first feature comes across as a grimly ironic refutation: Nothing Bad Can Happen.

But of course, all this trouble stems from only the best of intentions, as Tore joins up with the Jesus Freaks, a collection of born-again punk rocker types based in Hamburg, and soon after crosses paths with Benno (Gersak) and his family. Prone to epileptic fits, Tore accepts each seizure as a measure of divine influence, but when the Freaks leave Tore to flail around in the midst of a mosh pit, only Benno reaches out to save him.

Eventually disenchanted with his brethren once the sex and the drugs catch up with their rock & roll, Tore is happily taken in by Benno, wife Astrid (Kuhl), her teenage daughter Sanny (Kohlhof), and younger son Dennis (Theinert). However, as Benno’s overly forceful personality becomes increasingly evident, Tore refuses to leave Sanny and Dennis behind, intent on standing his ground and turning the other cheek in the face of escalating cruelties.

Inspired by true events, Gebbe’s compelling depiction of trailer-park martyrdom does become quite the grueling experience, as this wicked stepfather concocts all manner of ways to exploit his guest’s boundless devotion. However, for all of its visceral unpleasantness, the writer/director smartly remains ambiguous about whether or not Tore’s faith is misplaced, if not outright delusional, in a household where he alone demonstrates a capacity for basic human kindness. Feldmeier’s convincingly determined turn contrasts well enough with Gersak’s mounting menace to make either interpretation fair game.

The film’s three chapter headings (“Faith,” “Love,” “Hope”) seem less glib than the title does, identifying the primary emotional underpinnings of these relationships, even when bleak behavior threatens to dominate. Some of Benno’s punishments come across as more desperately extreme than others: Forcing Tore to swallow rotten food has a certain banal resourcefulness, while sending him off to get sodomized in a gay club feels far less likely.

For the most part, though, Nothing Bad manages to hold a tight grip, evocative as it is of Lars von Trier’s similarly unflinching Dogville and equally bound to start some conversations among those willing to stomach it.