America: Imagine the World Without Her

Essentially this “documentary” by noted right-wing pundit Dinesh D’Souza is review-proof. Designed to appeal to the convinced believer, its purpose is not to inform or reveal but rather to reinforce and inflame viewers’ existing prejudices. Currently, this kind of manipulative cinematic essaying pretending to be intellectual integrity by tagging itself as “documentary” is the vogue, being exactly the kind of filmmaking Michael Moore participates in from the left.

This is an unusually odious effort because it is so hugely hypocritical and ultimately self-serving. Presenting itself as a vigorous defense of America’s greatness, it targets the enemy as dissenting voices within the country. Attacking the very core constitutional vision of America as a melting pot of disparate ideas and battling ideologies, D’Souza argues that certain opinions are so deadly as to prove a fatal cancer to its existence. In defending the purity of his and only his vision of the country, he not only throws out the bathwater but deliberately adds the baby.

Combining talking heads, documentary footage, and creative historical reenactments, this professionally put-together film is driven by D’Souza’s impassioned narration. It claims that America’s critics have torn at our past and present and hurled accusations that, rather than a noble country on a great adventure, America is a broken capitalist, racist, classist nightmare with an unquenchable imperialist appetite.

This is all setting up straw men. Rather than deal with the complexity of mainstream dissent and the country’s long history of charged political discussion, D’Souza sets it up as bad guys and good guys. It is easy to imagine which opinions belong to which groups.

Finding the more extreme critics of the U.S., he interviews those who advocate returning the country to Mexico or the Indians or just in general gutting it. His lack of shame is so complete that he includes as a “representative” dissenting voice Ward Churchill, an anti-American extremist.

There are just too many examples of D’Souza’s brazen manipulations. He sets up a number of “charges” against the United States and then disputes them in a way where, rather than comparing oranges to apples, he compares them to elephants, and is shocked at the disparity. The criticism of American imperialism and foreign policy, he astonishingly argues, begins with Vietnam. Disputing the critics and defending that war, he talks to a downed Air Force pilot who spent six years in the Hanoi Hilton. Ignoring any arguments or logic, this simply appeals to the emotional leanings of his target audience.

D’Souza states that legendary organizer Saul Alinsky was a direct agent of the devil, then argues that President Obama and former Secretary of State Hillary Clinton are among his most devoted disciples. He attacks Alinsky for a strategy learned from Lucifer: polarization, demonization, deception – yet there is no greater description of the strategies of this film.

Well except that the entire work ends up being an attack on the current government’s oppressive misuse of power being illustrated by the martyrdom of said D’Souza, who has been charged with and has pleaded guilty to election fraud. More than just innocent, D’Souza paints himself as ennobled, even as he attacks the very dialogues and discussions that have and continue to make this country great.

As for a star rating: your call, based on your political beliefs. 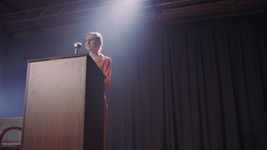 Hillary’s America: The Secret History of the Democratic Party
Another distorted salvo from Dinesh D’Souza

America: Imagine the World Without Her, Dinesh D’Souza, John Sullivan