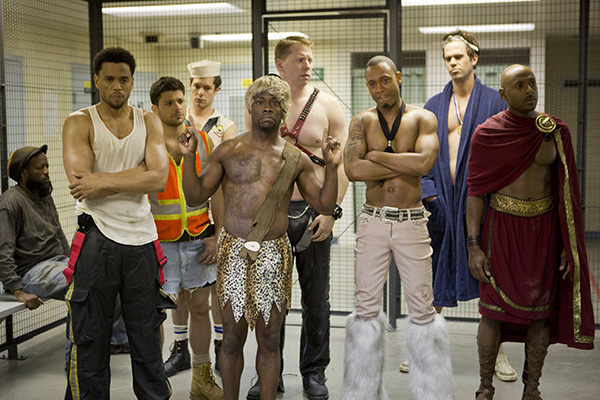 The generally unexpected success of 2012’s Think Like a Man revealed a twofold accomplishment. For starters, its box-office take reiterated to Hollywood that African-American audiences would happily turn out for any Madea-free fare with half a brain, even when the film took sly jabs at Tyler Perry’s largely interchangeable output. Secondly, this ensemble rom-com offered a welcome reprieve from the cornball genre contrivances of Richard Curtis (Love Actually) and Garry Marshall (New Year’s Eve), and turned the feature-length shilling of Steve Harvey’s titular self-help book into a relatively fresh battle of the sexes.

Now we find ourselves faced with the generally expected success of Think Like a Man Too – likely to be the year’s second hit (following Ride Along) for director Tim Story and star Kevin Hart – a more frantic, less funny reunion pic that proves whatever happens in Vegas will happen in just about every movie set in Vegas. Mama’s boy Michael (Terrence J) is there to tie the knot with single mom Candace (Hall), with proud bachelor Cedric (Hart) serving as his best man. Mya (Good) and Zeke (Malco) are trying to deal with Zeke’s party-hearty reputation; and Lauren (Henson) and Dominic (Ealy) are each faced with new job prospects; while Jeremy (Ferrara) and Kristen (Union) struggle to conceive their first child.

Don’t worry, each couple’s inevitable emotional reckonings are largely reserved for the third act. Until then, it’s as raucous a party weekend as a PG-13 rating will allow, with Story cranking up the tone to match both the neon pageantry of the Vegas Strip, and the loud-mouthed fervor of Hart – a proven crowd-pleaser who litters the film with plentiful pop culture references (Rain Man and Magic Mike each get their due) – and sports metaphors galore. The ranks have been filled out since last time: Dennis Haysbert arrives as a honey-voiced playboy, Adam Brody and David Walton show up as Michael’s old frat brothers, and Wendi McLendon-Covey (Bridesmaids) makes for a suitably oblivious wife to Gary Owen’s hopelessly square dolt.

Everyone in the ensemble is game for their respective misadventures, but little of it seems all that inspired. The makeover montage, the accidental drug doses, the celebrity cameos: All are Vegas-set requisites that feel fairly played out in the wake of three Hangover films, What Happens in Vegas, Vegas Vacation and Very Bad Things. When the closest thing to a novel gag is the bachelorette party’s rowdy rendition of “Poison” by Bell Biv DeVoe, now you know that what we’ve got here is actually the same old song.