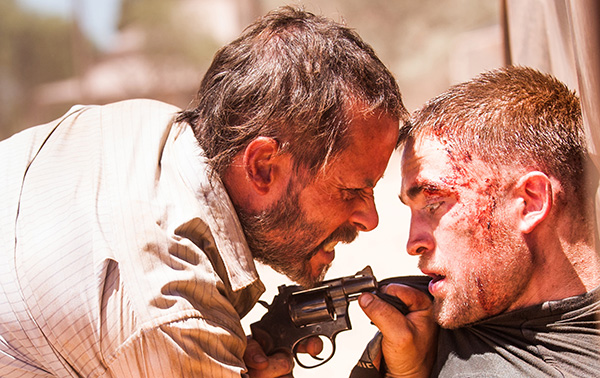 A guy walks into a bar. Everything else that occurs in The Rover flows from that one happenstance. The guy is named Eric (Pearce) and the “everything else” is the character’s bloody and protracted chase through the Australian Outback to retrieve his car, which was stolen while he was inside the bar having a drink.

The time, we’re told in an opening dateline, is “10 years after the collapse.” All we can really deduce from that is that the collapse has made the Outback dustier and more desolate and fly-ridden, and that it must have something to do with global economics since the currency preferred at the scraggly and infrequently appearing trading posts is American dollars.

Eric is a taciturn fellow, prone to letting his gun do his talking. Why he wants his car back so badly is something that’s not revealed until the film’s closing sequence. When the car thieves (McNairy, Manyimo, and Field) took his sedan, they left behind their perfectly running SUV, which had been beached by a road impediment. Eric gets the SUV unstuck and gives chase, but even though it appears he received the better end of this exchange, Eric stops at nothing to retrieve his car. While gun shopping at a bizarro-land outpost, Eric discovers Rey (Pattinson), a gut-shot cohort of the car thieves who was left behind for dead. Rey, the brother of one of the car thieves, is a dim but querulous soul, who provides a stark contrast to Eric’s gruff brute.

What The Rover lacks in story development, it makes up for with compelling tension, mystery, and acting finesse. Pearce again proves to be one of the great shape-shifters among the current galaxy of movie stars. Pattinson duly rids himself of the mindless heartthrob status accorded him by the Twilight trilogy, and here fully demonstrates his acting chops – even though the film’s massive bloodshed is bound to deter Pattinson’s young female fans. The cinematography by Natasha Braier brilliantly captures a crushing sense of the landscape’s vast, postapocalytic emptiness. In following up on his breakout film Animal Kingdom, writer/director Michôd (the screenplay is co-written with Joel Edgerton, based on Edgerton’s story idea) builds on the previous film’s depiction of twisted and violent family relationships and stunning performances (Jacki Weaver received an Oscar nomination for her role in Animal Kingdom). With fewer narrative underpinnings than cult road pictures like Two-Lane Blacktop and Bring Me the Head of Alfredo Garcia, The Rover reminds us of this heritage without adding much but more crazed bloodshed into the mix. Despite not breaking any new cinematic ground. The Rover plays like a taut spellbinder. 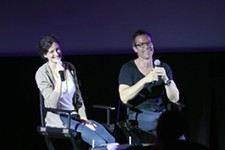 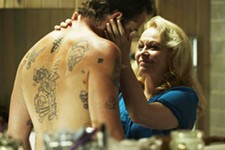 Animal Kingdom
An Australian family that commits crimes together avoids time together in this brutal look at the human survival instinct.