William Eubank’s background in marketing and music videos is plainly apparent in each of his directorial efforts, Fantastic Fest 2011 selection Love and this Sundance-approved follow-up, in which a trio of tech-savvy twentysomethings – Nic, Haley, and Jonah (Thwaites, Cooke, and Knapp) – allow a cross-country trip to get waylaid by the provocations of a mysterious hacker. After being drawn out to the Nevada desert by the titular beacon, our hapless trio soon find themselves detained in an underground facility, subject to the curious investigations of an aloof doctor (Fishburne, who's further removed by the hazmat suit he always wears) and given few actual answers as to what they have stumbled upon.

The mystery at hand shouldn’t surprise any seasoned sci-fi geek, but Eubank (who also co-wrote the screenplay) substitutes a remarkable visual flair in lieu of traditional suspense. Accompanied by the half-melancholy, half-foreboding strains of Nima Fakhrara’s score, any number of Instagram-worthy flashbacks to happier times are intended to serve as lyrical emotional shorthand. Cryptic conversations between Thwaites and Fishburne alternate between uncomfortable close-ups and wide symmetrical frames, emphasizing the eerily antiseptic setting, and speed-ramping (in which an image appears to fluctuate in time) is repeatedly flaunted whenever matters take a turn for the explosive.

If The Signal sounds like more style than substance, well, it is. The central premise teases out intriguingly enough without ever quite getting its hooks in – more content to dole out goofy revelations at a steady clip than effectively correlate Nic’s vaguely debilitating health and tumultuous relationship with his present predicament. Positioned as Hollywood’s It Boy of the moment, Australian actor Thwaites (Oculus, Maleficent, this August’s The Giver) shines in contrast to his co-stars – hamstrung as they often are by either plot vagaries or acts of archetypal heroism – and proves angsty enough on his own to anchor an escalating amount of mayhem about as visually eye-popping as it is narratively eye-rolling.

By the time Eubank reveals his endgame, the echoes of bolder films ultimately overpower whatever initial curiosity this one had up its sleeve. The result is a bit like seeing a Nike commercial make a drunken pass at its friend’s manga collection while the X-Files DVDs watch from across the room; it may not make much sense, but at least it’s never boring.

See “Sourcing 'The Signal,” June 13, for an interview with the director. 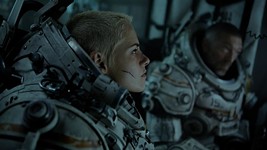