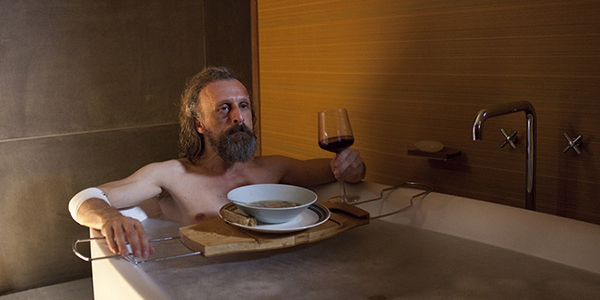 The fact that Dutch filmmaker Alex van Warmerdam is not celebrated here in the States perplexes me. Since his debut film, Voyeur, in 1986, van Warmerdam has been crafting a richly distinctive body of work, full of absurdist humor, perverse psychological games, and an ever-lurking threat of impending violence. Perhaps it’s those Danes to the north – I’m looking at you, Lars and Nicolas – who keep stealing his thunder with racy content and flashy camerawork. But I suspect that the release of his latest film, Borgman, may finally give the devil his due.

The film opens with the surreal sequence of Borgman (Bijvoet) – a cross between Rasputin and Jean Renoir’s Boudu – fleeing his underground warren in the woods, pursued by a priest and two armed men, obviously out to kill him. He eludes them and stumbles into an upper-class suburban neighborhood, going door-to-door in search of a bath. Look elsewhere for further events, as that’s all you’ll get from me by way of plot synopsis. This is definitely a film in which going in cold is to your benefit.

But coyness aside, Borgman is a supremely controlled and darkly nuanced fable that veers away from your expectations every time you think you have it figured out. It is dense with pagan and Christian symbols, allusions to art and folklore, implications of grander conspiracies, and it consistently throws you off balance in terms of character sympathies. It is, in short, a singular experience, a film that, while often lazily compared to Michael Haneke’s Funny Games, eschews that director’s penchant for clinical dissection in favor of a playfully nefarious tone. In the end, you may not get all the answers you’re looking for, but at a time when modern films pummel you over the head with their intentions, van Warmerdam’s ambiguity in mapping out Borgman’s implacable agenda will hopefully fuel many rewarding, post-screening discussions. Once upon a time, that was what great cinema did. 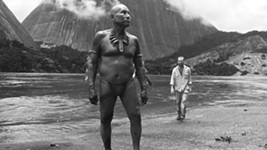