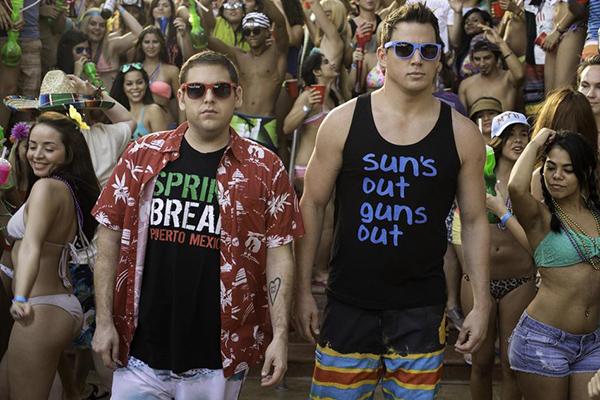 If you absolutely loved or even mostly enjoyed 21 Jump Street this is a no-brainer, as cops Jenko (Tatum) and Schmidt (Hill) again go undercover – although this time on a college campus rather than a high school. Combining terrific interplay between the two leads with a combination of genuine wit and just too blatantly dumb fun, 22 Jump Street is as often right on target as it is excessively over the top, making it a frequently delightful mess.

This is not moviemaking at its finest, but it is entertaining. If nothing else, I can think of no other mainstream, completely commercial Hollywood movie that so overtly embraces its homoerotic subtext while also having such a good time making fun of it. This is not to argue that there aren't a legion of Hollywood studio releases centered on homoeroticism, it's that most ignore or disguise this obsession. 22 Jump Street is goddamn delighted by it.

A new drug has been introduced on campus and has already led to one death. 22 Jump Street leader Captain Dickson (Ice Cube) reluctantly sends his two misfit cops, Jenko and Schmidt, undercover to find out what is going on. The boys are so obviously men that absolutely everyone comments on how unbelievable it is that they are really students. Again, if more forcibly than in the original, Jenko reignites his big-man-on-campus, sports-star role. However, this time out, Schmidt also discovers his previously unrealized undergraduate bliss. If not exactly courting love, he at least gets laid regularly by a hot co-ed (Stevens). With one of them enamored of a jock brother (Russell) in a platonic way, and the other with a hot girlfriend, the hardcore protagonist couple cracks.

The film is overdone but rarely undercooked. The creative team behind this, including the two leads, end up giving far more than the minimum they could have gotten away with – which results in an unusually fun and funny film.

The LEGO Movie
Let's face it: We're putty in these things' hands.