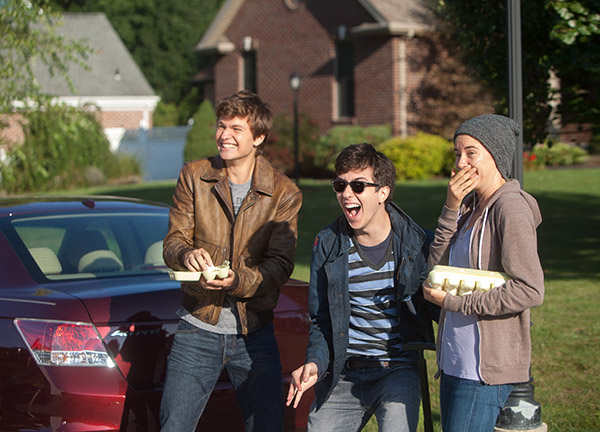 The Fault in Our Stars

Yes, teenagers are prone to hyperbole, but when 16-year-old Hazel (Woodley) warns “I’m a grenade,” she’s not far off the mark. Diagnosed with Stage IV cancer in her early teens, Hazel has gained years with the aid of an experimental drug; still, there’s never any question that she’s a terminal case. She worries about her parents (Dern and Trammell), who will inevitably survive her, and she wears the burden of that worry as heavily as the oxygen tank she must lug with her everywhere. She attends a weekly teen cancer support group – it makes her parents feel better, at least – but she’s not about letting people in: Hazel is already trying to minimize the collateral damage of her coming death.

Gus (Elgort) is more foolhardy, or romantic, or maybe just seize-the-day sensible. A cancer survivor and self-described 18-year-old virgin with only one leg, Gus doggedly ignores Hazel’s efforts to keep a safe distance, keep him in the friend zone. That they will fall in love is foregone, even for those who hadn’t already gulped John Green’s gorgeous source novel – director Josh Boone (Stuck in Love) announces the relationship at the very start of the film, in a flash-forward montage that plays like a trailer, or an early valentine to die-hard fans twitching for that first kiss. What is more striking is the film’s tender, relatable chronicling of Hazel and Gus’ new love, a first love that will also most certainly be their last.

Woodley and Elgort look like real teens, delicately signaled in their body language: her lip-biting push-pull of awkwardness and pleasure when dealt a compliment; the way she lights up when receiving a text message, thinking she’s playing it cool when her parents can see her giddiness big as a billboard; and how he postures hard (he uses a prop cigarette, unlit, as a metaphor for staring down death, which sounds about right for an 18-year-old). Elgort’s performance is more mannered than Woodley’s open-faced, direct line to the heart, but it works: His speeches sometimes tumble out in a mush-mouthed rush, a little over-rehearsed, and that feels true to a teenager who is terribly sweet, eager to please, and ga-ga about a very special girl.

Co-screenwriters Scott Neustadter and Michael H. Weber (The Spectacular Now) dial back on the spikiness that made Hazel’s voice so winning in Green’s novel, and her inner monologue is translated to screen via a gauzier voiceover. After a slow, sweet build to an adventure in Amsterdam, the film dramatically plateaus, but not ruinously so: It is simply placid about other foregone conclusions. The film has a gentle spirit; it makes no sudden movements. If you’re looking for anthemic, The Fault in Our Stars falls short. (Pledged early to truth-telling, the film forgoes engineered movie-moments meant to buckle the knees and turn a gesture or a song into a touchstone; you feel the void – why not strive for iconic with material this rich?) But the film is bundled in kindness, and that’s nothing to shrug at. Green’s book made a point of underscoring what a privilege it is to love someone – notably, not to be loved, but to do the loving – and the film adaptation movingly puts those words to picture.

READ MORE
More The Fault in Our Stars 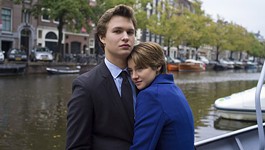