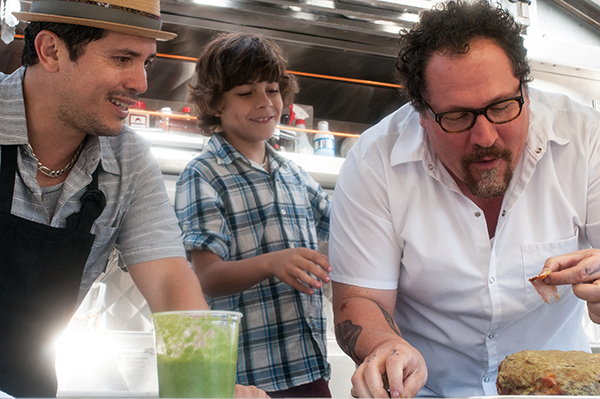 Chef is filled to the brim with the kind of heart and vivacity that makes up for the film’s familiar storyline, in which a man returns to basics in order to rediscover his passion, reclaim his soul, and reconnect with his 10-year-old son. Nothing is terribly surprising in Chef’s plot, but its up-to-date narrative ingredients of a food truck, Twitter, and the Internet add a freshness to the overall product that blends nicely with its heart and soul. It’s been more than a decade since Jon Favreau, who stars in the film as well as writing and directing it, has imbued a film with this kind of warmth. That was back in the days of Elf and Made, rather than Favreau’s more recent effects-driven fare like Iron Man, Zathura: A Space Adventure, and Cowboys & Aliens.

Ten years before the start of Chef, Carl Casper (Favreau) was hailed by the influential food critic Ramsey Michel (Platt) as one of the best new chefs in the U.S. That was when Carl was based in Miami, where, presumably, he also met his wife Inez (Vergara). Although she is now his ex-wife, Inez still feels warmly toward Carl, and they share custody of their son Percy (Anthony). All of them live in the Los Angeles area now, where Carl is the chef at a swanky restaurant owned by Riva (Hoffman), a testy man who forbids Carl from preparing anything other than the establishment’s tried-and-true dishes. Hoffman and Favreau, in character, lash out at each other with delightful fits of pique, after which Carl packs up his knives and walks out. Cooling his heels on a trip to Miami with Inez and Percy, Carl comes into possession of a beaten-up food truck, and his new life begins.

Joined by his kitchen underling Martin (Leguizamo) from New York and his son, Carl travels back to L.A. in the food truck, making memorable stops along the way to sell their Cuban sandwiches in New Orleans and Austin. (Aaron Franklin even gets a cameo when the truck stops at his Austin barbecue joint, and Gary Clark Jr., Güero’s, and some other local icons can be seen onscreen.) Percy promotes their food via Twitter and a Facebook page, which leads to familiar intergenerational barbs about new media. Meanwhile salsa music, R&B, and New Orleans funk play over the film’s numerous yet lively food-prep sequences.

It’s obvious that many parallels can be drawn between Chef’s fictional story and Jon Favreau’s filmmaking career. That need to get back to basics and allow one’s creative work to live or die on its own merits is intrinsic to both story arcs. Favreau serves up a tasty dish with Chef. So what if all the ingredients are familiar, when the result tastes fresh and handmade?