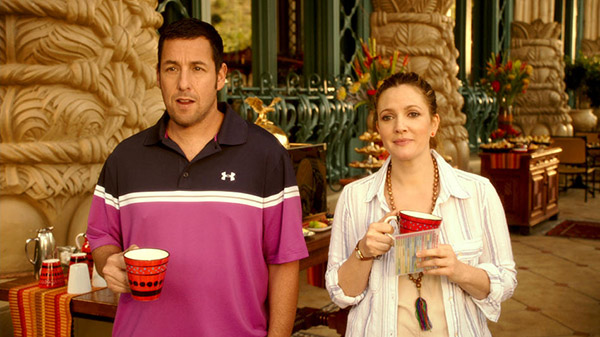 Increasingly, it seems that Adam Sandler’s filmmaking career functions as a means of financing his family vacations. The Grown Ups series (two films, so far) gathers together Sandler’s comedy buddies for amusing but aimless rendezvous amid nature. In 2011’s Just Go With It, in which Sandler co-starred with Jennifer Aniston, the action takes the characters to Hawaii for the bulk of the film, and now for Blended – Sandler’s third co-starring feature with Drew Barrymore – the plot takes the characters to South Africa, where more than half the movie is set. The rest is filmed around the environs of Buford, Ga., and the town’s Lake Lanier Islands Resort. By now, we’ve come to expect cameo appearances by Sandler’s wife and children in his movies, yet no fewer than five additional Sandlers receive billing in Blended. Mind you, I’m not arguing for a complete separation of work and play, but in Sandler’s case it seems like the back-end is taking precedence over inspiration and self-expression. Make another movie with Barrymore after The Wedding Singer and 50 First Dates turned out to be box-office gold? That’s a no-brainer. Pick out a vacation spot and then build a movie around it? That’s lazy filmmaking.

The laziness is what irks me most about Blended. Everything from the re-teaming of the two stars and their Wedding Singer director, Frank Coraci (Sandler’s go-to director when his other go-to director Dennis Dugan isn’t free), reeks of moviemaking by checklist. And when there are many millions of dollars on the line, I don’t necessarily want to argue that this is a wrong-headed approach. It’s just unlikely that the checklist method will yield anything original – but, hey, that’s not always the goal. Certainly not in the aptly named Blended.

Jim (Sandler) and Lauren (Barrymore) have a disastrous first date, but soon they find themselves booked into adjoining suites in Sun City, South Africa, when each grabs the unused vacation bookings of friends, whose own plans were scuttled at the last minute. Each arrives with their kids, who conveniently are the opposite sex of the parent. Lauren’s boys need someone who can teach them how to bat balls, and Jim’s girls need someone who can educate them about buying tampons. As they move from episode to episode in Africa, the reluctant duo are serenaded, pop-up fashion, by Terry Crews and a backup vocal group – reminiscent of the way the Farrelly brothers used Jonathan Richman as a commentating troubadour in There’s Something About Mary and Kingpin (the primary difference being that Crews also removes his shirt and make his pecs dance, much to viewers’ delight). Actually, there’s a lot of funny material in Blended, and Sandler and Barrymore are, indeed, a winning duo. Yet so much of the filmmaking is sloppy (mismatched cuts, narrative implausibilities, etc.) that it’s clear this film’s only ambition is profit. Back in the day, artists came together in song to state that they “ain’t gonna play Sun City.” Their beef with apartheid is now a rallying cry from the past, but I wouldn’t mind hearing another chorus or two in reaction to Blended. 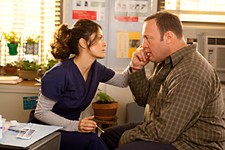 Zookeeper
There are many things we can learn from the animals but lessons in love from talking primates is not one of them.