Godzilla, cinema’s most beloved and feared monster, returns once more to save humanity from its own arrogance, as well as a couple of new radioactive MUTOs (Massive Unidentified Terrestrial Organisms). This Hollywood monster epic manages to honor the creature’s Japanese Atomic Age origin story and obliterate the memory of Roland Emmerich’s disappointing 1998 revival. The monster mash proves to be a lot of fun once it gets going and we watch as cities are tromped to bits, but the film’s human drama only bogs things down with expository dialogue between the scientists (Watanabe and Hawkins) who track the MUTOs from continent to continent, and a focal family (Taylor-Johnson, Olsen, and Bolde) who struggle to reunite amid the mayhem.

Signing on Gareth Edwards to direct this huge Hollywood tent-pole turned out to be a smart decision, even though the relatively inexperienced Edwards had only directed one other feature: the micro-budgeted Monsters, for which he created all the effects himself. Here Edwards marshals all the 3-D creature effects admirably, but the human interactions are flat and uninvolving. The thundering music score by Alexandre Desplat is an atypical one for this composer and often competes with rather than enhances the action.

A prologue set in 1999 Japan, in which a nuclear plant manager (Cranston) tries to prevent a meltdown in the reactors, is a clear parallel to the recent Fukushima tragedy. Then jumping 15 years into the future, that plant manager’s son (Taylor-Johnson) has grown into a bomb-detonation expert for the U.S. military, who is based in San Francisco where he lives with his wife (Olsen) and young son (Bolde). He’s quickly called back to Japan to bail out his father, who has been caught trespassing in the quarantined zone of the plant explosion. Presumed to be crazed with grief over the meltdown and loss of his wife (a too-briefly-seen Binoche), no one takes his talk of another impending crisis seriously. Meanwhile the scientists traipse from locale to locale as they deductively try to make sense of the revived MUTO activity, and are joined by the U.S. military’s point man (Strathairn).

This Godzilla befits our cinematic era of 3-D, digital special effects (though it’s a bit surprising that the 3-D is never used to reach out into the audience and thwack viewers with the monsters’ limbs or pincers or spew of fire). It’s a creature feature for the Subatomic Age. 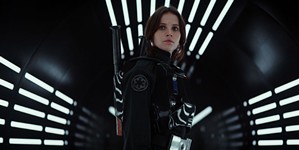 Rogue One: A Star Wars Story
The Force is strong with this one

Monsters
In this startlingly original indie film, a road trip combines with an alien invasion to remind us of our ageless fear of otherness.