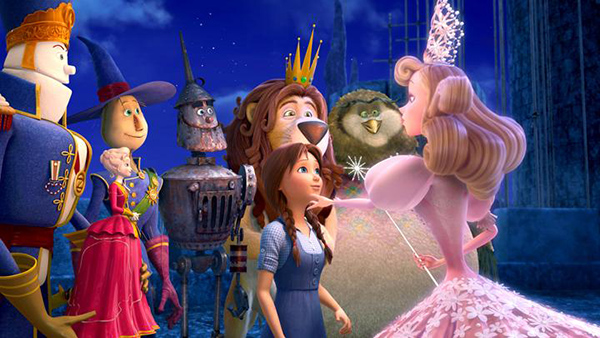 According to the Library of Congress, 1939’s The Wizard of Oz has been seen by more viewers than any other movie, a piece of trivia I mulled over as the lights went down in the theatre and a couple with four small children came in, thus upping the attendance to seven. The stories that L. Frank Baum wrote have been spun off, remade, and adapted into numerous incarnations ever since that first novel was published over 100 years ago, and it seems they will continue to do so with wildly varying results. Which brings us to Legends of Oz: Dorothy’s Return, the title (specifically the colon in the title) being an unfortunate harbinger of future entries.

Based on the children’s book by Baum’s great-grandson, Roger S. Baum, this animated film starts off with Dorothy (Michele) awakening back in Kansas after ridding Oz of that pesky Wicked Witch of the West, only to find that not even a day has passed since embarking on her adventures on the yellow brick road (time moves differently in Oz, you see, and that’s all the film has to say about that). The aftermath of the tornado that sent her there has ravaged the Kansas town, and she and Aunt Em (Adams) are threatened with eviction, but all that is quickly forgotten when a magical rainbow mover (don’t ask) sends Dorothy and Toto back to Oz. The Scarecrow (Aykroyd), the Lion (Belushi), and the Tin Man (Grammer) have been kidnapped by the Wicked Witch’s brother, the Jester (Short), and he seeks to rule the land by turning everyone into helpless marionettes, and only Dorothy can save them. Along the way, she picks up some new traveling companions, who serve as both mirthless comic relief and romantic subplot fodder, and things pretty much play out as expected.

Carping on a film clearly targeted to 5-year-olds might seem unjust, but the filmmakers go about their business in such a lazy fashion that the viewer can’t help but feel irritated by the whole ordeal. The animation style is about as bland as it gets, the songs are cloying, and the 3-D is an obvious afterthought. There are no lessons learned here, either, unless you count the whole absolute power corrupts absolutely business, and what preschooler doesn’t need a lesson in that timeless adage? Bring me my ruby slippers, Toto, we’re getting the hell out of here. 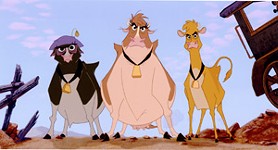 Home on the Range
It’s fitting that this is Disney’s last traditionally animated feature; the whole affair has a warm, nostalgic feel.