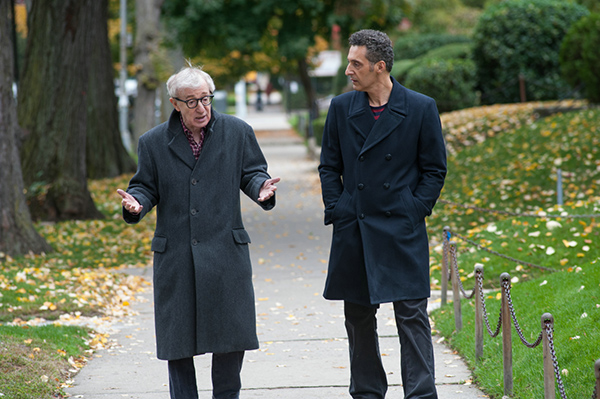 Everyone is familiar with John Turturro, the actor, who’s become a dramatic staple in the films of Spike Lee, the Coen Brothers, and many other independent-minded filmmakers of the last two decades. Yet John Turturro, the writer/director, is a less widely known quantity, even as his fifth film Fading Gigolo, in which he also co-stars with Woody Allen, fans out across American movie screens. Each of the films he’s directed is as idiosyncratic and soulful as his performances. The same is true for Fading Gigolo, except that this film is ultimately more high-concept than well-developed drama.

Turturro plays the title character Fioravante, a 50ish cipher who has only his part-time job as a florist when his friend and employer, Murray (Allen), shutters his small Manhattan bookstore. Murray has known Fioravante since he was a child and, while visiting his dermatologist, the older man hits upon an idea for a new money-making scheme for the duo. He overhears the doctor (Stone), a woman of a certain age, expressing her desire for a sexual threeway, and immediately comes up with the idea of pimping out his young friend Fioravante. The doctor, naturally, wants to test the wares herself before bringing in her friend (Vergara) for the sexcapade. Meanwhile, one of the many children in the household in which he lives with an unbilled Jill Scott (a domestic relationship that’s never explained) comes home from school with head lice, which sends Murray off with the gaggle of children to Williamsburg, Brooklyn, to visit the Hasidic widow Avigal (Paradis), who is an expert delouser. Murray decides that what the lonely, cloistered woman needs is the services of his partner Fioravante, whose gentle patience endears him to his customers. Avigal’s outings raise the ire of Dovi (Schreiber), a leader of the Hasidic community’s safety patrol, who has always loved Avigal from afar.

The setup is great, but Fading Gigolo’s follow-through lacks dynamism. Fioravante remains a mystery man from beginning to end. The film winds up as a better premise than engaging story. It’s delightful to see Woody Allen as an actor working in someone else’s project, even though his Murray is only a slight variation on the character he plays in his own movies. Sharon Stone and Sofía Vergara nicely tone down their brassier sides, and Vanessa Paradis, the French singer and actress, is a true revelation playing the demure, taciturn Hasid widow. It’s as if Turturro focused on every actor in this film but himself. Fioravante – the title character – is little more expressive than all the potted plants he so artfully arranges. It’s a shame because there are bits and pieces of a dandy film here that get choked out by a barrier of unproductive mulch.