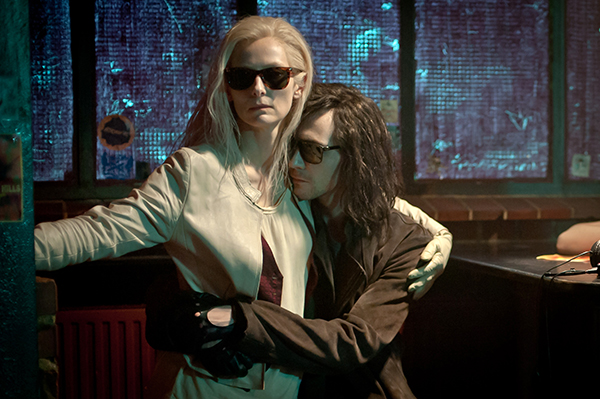 You can rest assured if you’ve been worrying that Jim Jarmusch – the arthouse auteur and one of the reigning royals of independent cinema – has bowed to the demands of Hollywood trendiness with this vampire picture that’s been making the festival rounds since its debut in Cannes last May. Despite being a film that features vampires as the central protagonists, Only Lovers Left Alive is less about matters of blood and its acquisition than what it takes for love and romance to survive over centuries.

Eve (Swinton) is living languorously in Tangier when she books a night flight to Detroit, to come to the side of her beloved Adam (Hiddleston), a musician who’s grown weary of the world and its sorry state. No new sounds or music please his ears, as might be fitting for a creature who’s heard it all before. Adam and Eve (these names, perhaps, being the movie’s only unoriginal stroke) luxuriate in each other’s company as they wander the streets, walking and talking. Long ago, these beings gave up blood-sucking for the procurement of black-market blood from hospital blood banks. Until Eve’s sister Ava (Wasikowska) arrives on the scene and stirs up some trouble, Adam and Eve enjoy their reunion.

More than anything, these lovers resemble bohemian hipsters dressed in exotic finery and constant dark shades. The locales of Tangier and Detroit fit the characters as constant reminders of the magnificence that once was but is now suffering from decay and disrepair. Whether following Jarmusch’s camera through the winding alleyways of the Tangier casbah or the eerily quiet streets of Detroit, the viewer never lacks for stimulation or idle observations. The film is hypnotic, which lends it an addictive sensibility that complements the need Adam and Eve have for their bloody fixes. Plus, the transfixing beauty of actors Hiddleston and Swinton has rarely been deployed to such an alluring degree as Jarmusch accomplishes here. Only Lovers Left Alive has no need to resort to hyperbole when a character exclaims: “Oh darling, that was centuries ago.” It’s a statement of fact, but also a reminder that some things are eternal.

Visit "Tilda Swinton and Jim Jarmusch Go Together Like Cream" for the Chronicle’s interview with Tilda Swinton conducted during her appearance last month at South by Southwest.