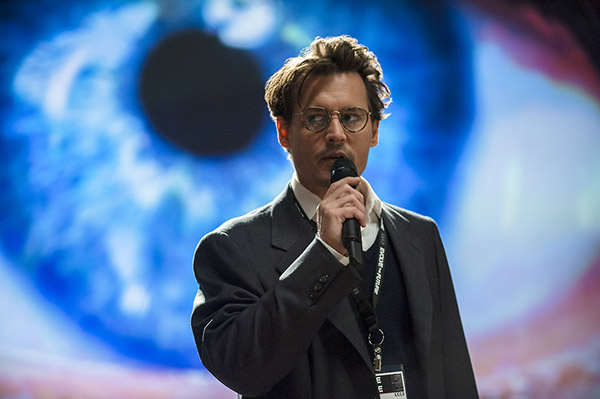 The Singularity gives birth to a kind of Frankenstein’s monster in this futuristic thriller from first-time director Wally Pfister, Christopher Nolan’s longtime cinematographer who won an Oscar for his work on Inception. It’s tempting to imagine the better film that Nolan, who executive-produced Transcendence, might have made from the raw materials available here; certainly with Inception, Nolan showed a surer hand juggling multiple storylines and dialogue ticklish with technobabble than Pfister and screenwriter Jake Paglen do.

The film kicks off with a brief flash-forward that serves little purpose but to leech the tension out of the next two hours. (Let’s just say we know from minute one that things are going to go pear-shaped.) Jogging back five years, Transcendence introduces a married couple, Will and Evelyn Caster (played by Johnny Depp and Rebecca Hall), who have devoted their life’s work to artificial-intelligence research, and their best friend (Bettany), a doctor who has reservations about the wisdom of manufacturing sentient machines. Also in the mix are a neo-Luddite terrorist cell (led by Kate Mara, doing her surly, dead-eyed thing), an FBI unit (captained by Cillian Murphy, doing his creepy, affectless thing), and another AI researcher (played by Morgan Freeman, doing his soothing, avuncular thing). When the Casters uncrack the code on uploading human consciousness (or maybe just some simulacrum of it), the various factions tangle and sometimes convert to another’s cause.

Transcendence is not unambitious: It raises interesting questions about morality/personal responsibility and technology, about the power of love (and hubris) to corrode one’s belief system, and about how easily, imperceptibly a line in the sand may shift. But the filmmakers frame those questions in just about the most prosaic ways possible: a jumble of crosscuts to wanly drawn characters engaging in either boring and/or incomprehensible acts. A bright idea, disappointingly dulled in the execution.