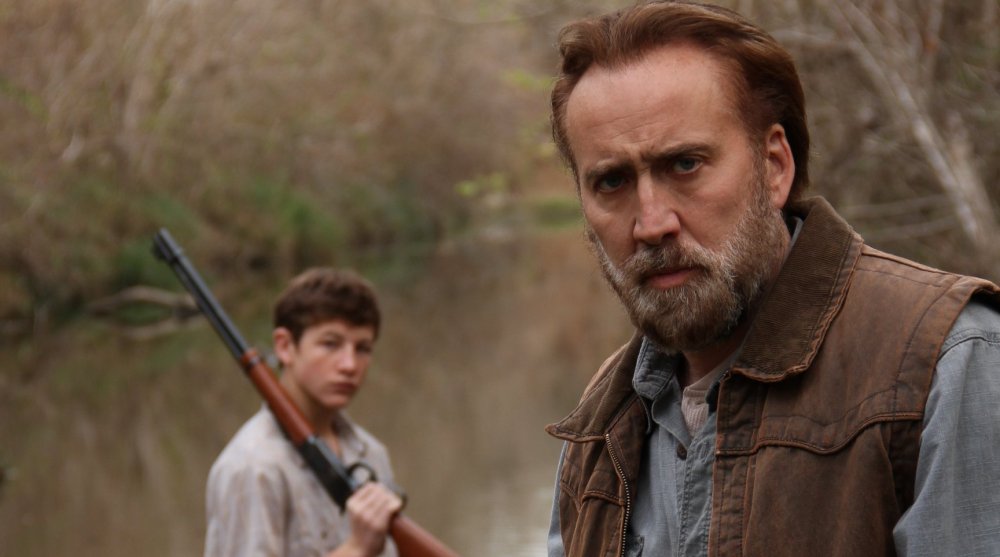 This movie Joe is an average Joe only in the sense that the character is driven by equal measures of good and bad impulses. The film is based on a 1991 novel by Larry Brown, and scripted by Gary Hawkins, the writer/director of the films The Rough South of Larry Brown and The Rough South of Harry Crews. Rough South seems a more accurate term than Southern Gothic to describe the spartan tragedy that lies at the heart of this narrative. Brown’s characters are generally working folk whose brutal lives are complicated by drink, sex, and other people. The spare tone of Brown’s work lacks the florid nature of the Southern Gothic but shares the subgenre’s propensity for flawed characters.

Joe (Cage) is the manager of a work crew whose job it is to poison undesirable trees so that the lumber company can reseed the area with more desirable trees. In addition to this perverse job, Joe’s sketchy past involves a stint in the penitentiary, and he constantly struggles to restrain his more violent impulses. In 15-year-old Gary (Sheridan), who begs Joe for a job on his crew, the man sees another damaged soul, but one that remains full of promise and hope for a better future. Gary is a hard-working kid who is physically abused by his alcoholic father (Poulter), but is nevertheless the backbone of his family as they drift from squat to squat.

For the first time in a long while, Nicolas Cage gives a performance that delivers on his early promise of being one of the best actors of his generation. Cage finds the nuances in a man whose very self-control camouflages his fear of losing control. The kinship and protectiveness he feels for downtrodden Gary probably surprises Joe more than anyone else. In his follow-up film to Mud, the Texas-bred Sheridan proves that the previous film was no fluke and that he’s one of the best young actors of his generation.

As for the Austin-based Green, the director’s characteristically understated style is well-suited to this material. Joe recalls, in many ways, the filmmaker’s earliest features – George Washington, All the Real Girls, and Undertow – not to mention his heavily wooded last feature, Prince Avalanche, films that capture a poetic sense of bewildered young people in the rural South. Here, as in previous films, Green continues to work with many of the same behind-the-scenes colleagues who’ve collaborated with him in the past – most notably, cinematographer Tim Orr and musicians David Wingo and Jeff McIlwain. Joe loses some of its focus when it delves into an undercooked revenge plotline, but the film uncorks its subtle beauty when it compares and contrasts the connections between Joe, Gary, and all the film’s secondary characters.

Gary Poulter, who plays the alcoholic father and died shortly after filming was completed, is remembered in “His Name Was Gary Poulter,” April 11.