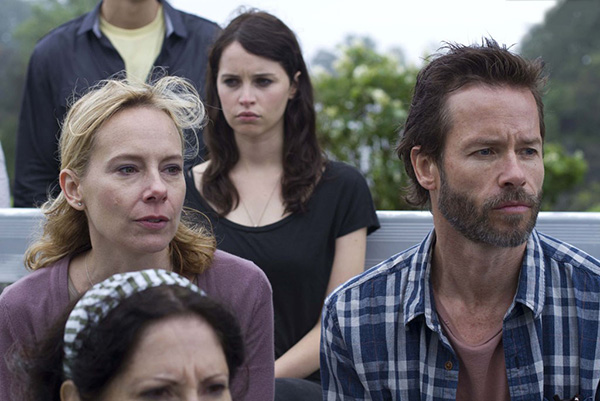 Fine performances barely make up for this melodrama’s narrative bankruptcy. From the first thunderclap and heavenly downpour, you know where this soggy tale is headed – and it’s nowhere good or original. Director Drake Doremus, who co-wrote this film with Ben York Jones (also his writing partner on Like Crazy, their previous feature), has terrific actors doing his bidding, but none of them can elevate this story of barely legal love into anything that’s emotionally resonant or sympathetic.

As the film opens, the Reynolds family of upstate New York is about to have their bucolic lives disrupted by the arrival of British exchange student Sophie (Jones) into their host home. Husband and dad Keith (Pearce) teaches piano at the local high school but his midlife crisis is made clear as he rummages through old photos of himself with his former rock band and winces when his wife Megan (Ryan) refers to his occasional performances with the symphony orchestra as a hobby. Their daughter Lauren (Davis, who has an uncanny resemblance to young Laura Dern) is a typical teen: She’s a member of the swim team who longs for a car of her own and the affection of a boy who’s clearly not worthy of her. Megan collects and sells cookie jars – an apt metaphor in this story about a grown man who gets caught with his fingers inside the proverbial cookie jar.

The English rose, Sophie, arrives into this sheltered hothouse where her presence upsets the ostensible calm of the Reynolds family. The screenplay takes care to establish that Sophie has already turned 18, but it’s still creepy to witness the lingering glances between the young woman and middle-aged Keith. Those glances turn into something more as Keith grows ever emboldened by Sophie’s youthful blather about the importance of being true to oneself. But like the game of Jenga the family plays at the beginning of the film, the removal of a single piece is enough to topple the entire structure: Cue the rainstorms, smashed cookie jars, and car crash. Breathe In piles on lots of dramatic occurrences that substitute for the characters’ lack of depth and poor decision-making. More passion can be heard in the film’s classical soundtrack than what emanates from the mouths of the characters. Breathe in if you must, but don’t wait to exhale.